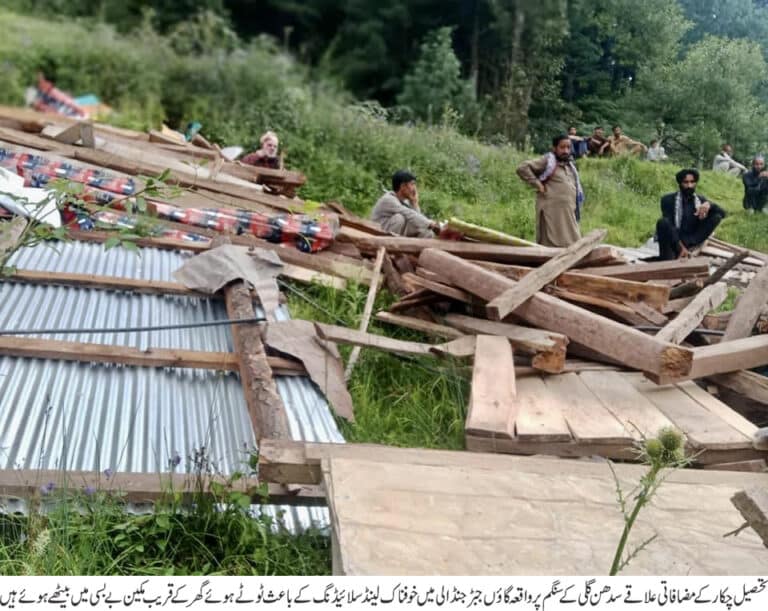 Hattian Bala: (Bureau Report) Hundreds of residential houses are in danger of being destroyed due to a terrible landslide in village Jabar Jandali on the outskirts of Chikar Tehsil of Chikar, Jhelum Valley district of Azad Kashmir. Reported Azadi Times,

The chances of hundreds of people becoming homeless increased. It is said that the government and the relevant authorities should take serious notice of the Jawbar Jandali landslide issue until the lives and property of the people are secured. Surah families have been moved to safety. The incident at the junction of Zamin Sidhan street is moving from the rear side of village Jabar Jandali / Benazir Palace, resulting in the son of Nik Muhammad, son of Bahadur Din, Maqsood Ahmed, Mahmood Ahmed, Masood Ahmed, sons of Nik Muhammad, Hafiz.

Naib Tehsildar Chikar Khawaja Abdul Salam and Constituent Patwari Salmia Patwar Sheikh Akhlaq, while briefing the representatives of national newspapers about the affected area, said that there is a terrible landslide in Jabarjandali. There is a fear of sliding, five residential houses have been destroyed by landslides While more than 12 are partially affected, the affected families are being moved to safe places. Naib Tehsildar Khawaja Abdul Salam said that the rapid movement of the land may take the form of a terrible landslide, which will destroy about fifty more residential houses. The high authorities have been informed about this and the affected population has been instructed to move to safe places to avoid any kind of loss of life.

New date of Azad Kashmir LG elections will be held on September 28,