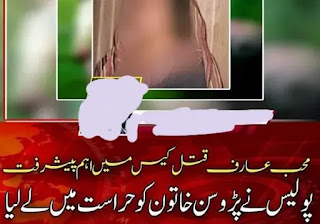 A woman from the neighborhood injured the child by throwing stones at him. The women then severely injured the injured child and knocked him down a hill near the house. After finding out the reason, it is said that Mohib Arif used to go to play with his children every day.

According to details, the tortured body of Mohib Arif, an 8-year-old innocent child of Muhammad Arif Hashmi, was recovered on August 31, 2021 in Chattar No. 2, a suburb of Bagh-e-Azad Kashmir. A man named Arif Hashmi is a white-clad and sick man whose 8-year-old son Mohib Arif had been missing from home since 11 a.m.

When he did not return home for a long time, the family started searching for him. The tortured body of 8-year-old Mohib Arif was found in the grass from the area. Signs of torture were found on the face and body of Mili Mohib. Expressing concern over the mysterious death of an 8-year-old boy named Mohib Arif, where the autopsy of an innocent child was carried out, the public demanded the government and the district administration to expose the motives of this anonymous murder and bring justice to the victims and their families.

Take steps to ensure supply. Police gave full assurances of the operation and within 24 hours of the operation, Mohib Arif murder case allegedly involved brutal accused was taken into custody. Hit with a stick and then threw in the bushes near the house.

It is said that Mohib Arif used to come to play with his children every day. Police detained the woman and her children and began further investigations.

Dhirkot: A government employee who made immoral videos with a hidden camera was arrested