Chikar: AJK government and administration have been given a 12-hour deadline to arrest the accused involved in the attack on SHO Chikar 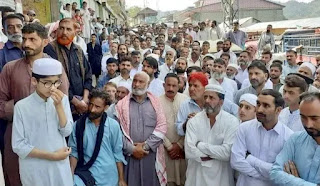 (Daily AMV Tribune) IG, DIG, Chief Secretary and Prime Minister of the Independent Government of the State of Jammu and Kashmir gave a 12-hour ultimatum to Sardar Abdul Qayyum Khan Niazi, otherwise no one could stop us from playing brick by brick, according to Gamedia reports.

Participants said that we are followers of Husseinism. We have never believed in Yazidism before and we will never accept it. Imam Hussein’s words teach peace and brotherhood throughout his life The reaction is very worrying. * Jhelum Valley is a region free of peace and religious hatred.

The people of this region have always been at the forefront of promoting peace and brotherhood, but a few evil elements have disturbed the peace and tranquility of this region. Prolonging religious hatred can only exacerbate tensions. The concerned authorities have been given a 12-hour deadline.

If legal action is not taken against the elements involved within 12 hours and they are not chained, then all the constituencies of Chakar Tehsil will not only protest but also pay the price for this atrocity. We will not hesitate to take any step to do so.