by News Desk
in ajk news, Latest, story
Reading Time: 2 mins read
A A
0
0
SHARES
Share on FacebookShare on Twitter 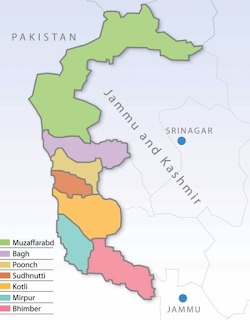 RAWALKOT: (Azadi Times) The deadline set by the Election Commission of Azad Jammu and Kashmir for the re-determination of Union Councils and ward closures for the mid-year local body elections in Azad Kashmir has expired on January:

Lists of Union Councils and Ward Closures will be displayed in front of the Deputy Commissioner’s Office across Azad Kashmir. In the light of the decision of the Supreme Court of Azad Jammu and Kashmir, the population of the Union Council has been increased from ten to fifteen thousand while in the Municipal Corporation this number has been fixed at thirty five to five thousand for any ward.

According to the court order, the population of Union Councils is being determined according to the census conducted in 2017, due to which there is an ambiguity among the people as in some places, in the elections to be held in 2021.

The numbers were compiled in collaboration with Nadira Mari is more than the registered population, meanwhile in Poonch district in sub-Abbaspur where Union Councils were earlier three now their number has been increased to four including Chhatra, Khili Darman, Chafar, Tangiran, Banjunsa, Hussain Kot.

The decision regarding Union Councils of Horna Meera, Pachhiyot and Hajira will be taken today. According to the deputy commissioner, the objections to these union councils will be heard by January 9, after which the final list will be released.

UN should implement approved resolutions to resolve the Kashmir dispute