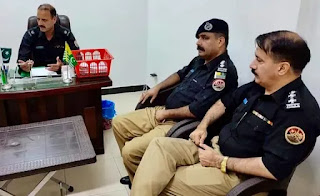 He said that due to police engagements in the recent elections and security arrangements for Muharram, some anti-social elements are on the rise in which drug traffickers are changing their network and selling liquor and hashish.

After clear instructions, all the police stations performed brilliantly, which led to the arrest of several drug dealers. Giving a briefing, he said that during the last one week, CIA police station recovered 172 bottles of liquor. Chinari police station Lipa police station. Murder accused arrested in 36 hours.

Riaz Mughal According to Mazhad, Zia Arif Khan, son of Ghulam Muhammad, a resident of Khanda Bela, was arrested from Hatia Bala Bazaar yesterday. Zia Arif is a professional drug dealer. Zia Arif is a notorious drug dealer who has destroyed the young generation.

In another case, Syed Bilal Hamdani son of Syed Bahadur Shah resident of Chandkot has been arrested and five cases of liquor have been registered. Media Civil Society Police To save the young generation from the scourge of drugs. Drugs have left the society hollow.

I will not allow drugs to be sold until I am posted as SP Jhelum Valley.