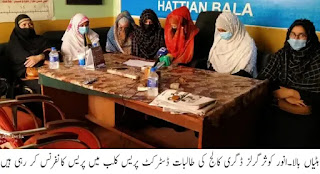 She said that we were studying in the college as regular students. Due to the government notification due to code 19, all the students from all over the state were promoted from the first year and sent to the second year.

We received regular form fees, photos and other fees for sending the passed second year admission form to the board but when the exam started our roll number slip was not found. Our parents contacted the board.

Revealed that the admission forms for girls were not sent by the institution while all the students were told that your admission forms have gone. Prepare thoroughly for the exam.

The future has been played by the administration of the college oppressing and abusing us Our parents were also told that the forms had been sent. Sana Bibi, Fiza Elias, Asma Farid, Maryam Khadim, Manoor, Hamida Bibi along with their parents said that The Prime Minister of Azad Kashmir appeals to the Minister of Higher Education, Secretary of Education and Chief Secretary of Azad Kashmir to remove the oppression and abuse that has been done to us.

A high-level investigation into the alleged forgery should be carried out and we should be given justice. The students said that it is our fault that such a severe punishment will be meted out. If we do not get justice, we will burn in front of the Prime Minister’s Secretariat.

According to the law, all students registered in the board will be included in the examination as regular students. When he went, he gave his position and said that his grade was F, so his admission was F.