by News Desk
in AJK, Top Stories
Reading Time: 2 mins read
A A
0
0
SHARES
Share on FacebookShare on Twitter 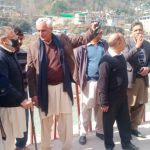 He also directed to rehabilitate the playground and plant green grass for the students of Pilot School No. 2.

He said that the present government of Azad Kashmir has proved that we believe in practical work instead of relying on empty claims. We are doing our best to make the election promises a reality and as the Minister for Local Government I am taking this spirit all over Azad Kashmir. For me, the construction and development of Azad Kashmir is the first priority and that is why I am taking steps. A large number of locals expressed satisfaction over the special interest shown by the Minister for Local Government in the city’s projects.

When will the local body elections be held? President AJK Sultan Mehmood Chaudhry’s position has come out