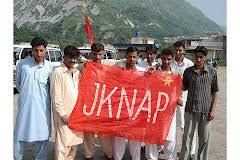 RAWALAKOT: 13 more people named in the case of road closure in Jandathi and Thala and Tain areas of Poonch (POK) have been arrested. These people were arrested by the police from Jandathi, Rawalakot and other places.

Those arrested are accused of blocking the roads and suspending the traffic system during the protest against load shedding, due to which the people of the area, including transporters and passengers, were facing serious problems.

A protest demonstration was held in Thorar against these arrests and demanded that the cases against the arrested be terminated and they be released unconditionally, otherwise they will strongly resist.

Pak Gali President Raja Ashfaq Jannat Kayani and others reacted to the arrests Expressing that the arrests are the result of the government’s negligence, those who speak for the rights of the people are jailed, which is not an acceptable measure, if they are not released immediately, a protest movement will be launched and every The voice will be raised on the platform.

He said that the government and the administration should show seriousness and instead of solving the public problems, it is unreasonable to arrest those who speak about the rights of the people. He should be released unconditionally immediately.

iPhone 14 likely to be introduced in September