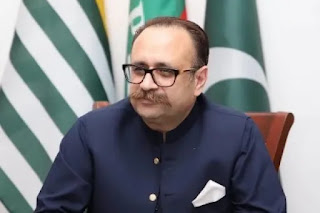 His father, Sardar Aliyas, is chairman of Tamimi, a well-known Saudi business group. His uncle, Sardar Saghir Chughtai, was a member of the Pakistan-administered Kashmir Legislative Assembly and was involved in an accident near Azad Patan last month. Construction begins.

He is one of the partners of this shopping mall. Over the last few years, he became interested in politics and started getting closer to Imran Khan and the Establishment. In 2018, he tried to get a PTI ticket in the Senate elections but he could not succeed. In 2018, he was made part of the caretaker cabinet of Punjab.

After the formation of the PTI government in Punjab, he was first appointed as the Chairman of the Board of Investment and then he was appointed as Special Assistant to the Chief Minister of Punjab.

He became interested in Kashmir politics and became embroiled in a series of controversies over differences with Barrister Sultan, the local president of the Pakistan Tehreek-e-Insaf (PTI).

He became known as ‘Helicopter Babu’ and ‘Tareen of Kashmir’ due to his inclusion in the party.