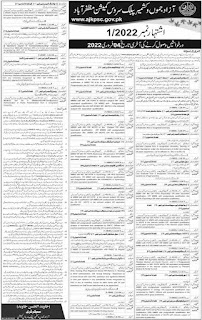 After the establishment of independent government, the State of Jammu and Kashmir implemented the Rules of Business for the first time from 28 December 1950. The Azad Jammu and Kashmir Public Service Commission was constituted under the Acts mentioned above.

The first head of the commission was Ghulam Mohiuddin (CSP) who served as the Chief Advisor to the Ministry of Kashmir Affairs. were giving Under his leadership, the Commission started its regular work. Later in March 1967, the offices of the Commission were shifted to Muzaffarabad.

Duties of the Commission

Under the Act, 1986, the duties of the Commission shall be as follows. Civil Services of Azad Jammu and Kashmir conduct tests and examinations for recruitment to and such posts in connection with the affairs of Government as may be prescribed under the rules laid down in section 11.

Recruitment to the services and posts referred to in clause A. To advise the President of the State on matters relating to the eligibility and procedure of the candidates. Besides any other matter which the President may refer to the Commission for scrutiny.

The Commission will conduct tests and examinations for recruitment in the following categories. Except for the posts specified in Schedule 1, civil services and civil posts connected with Government affairs and falling in Grade 16 and above.