by News Desk
in Azad-Kashmir, Top Stories
Reading Time: 2 mins read
A A
0
0
SHARES
Share on FacebookShare on Twitter 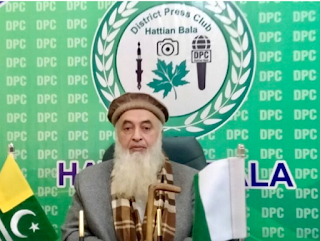 He made the announcement while addressing a gathering for Friday prayers at Jamia Masjid-e-Mustafa Hatian Bala.

He has opened a slaughter house outside the mosque for personal gain and has infected the children and the people of the madrassa with various diseases,” he said. They want to make you suffer, which is unbearable There is an open space in front of the commissioner’s office.

Deputy Commissioner Jhelum Valley. Build a slaughter house in front of your office. He said that if the slaughter house was not demolished then we would hold a protest which would not have any record in the history of Hatiya Bala.