David, Victoria Beckham concerned Brooklyn may end up getting ‘hurt’ by Nicola Peltz 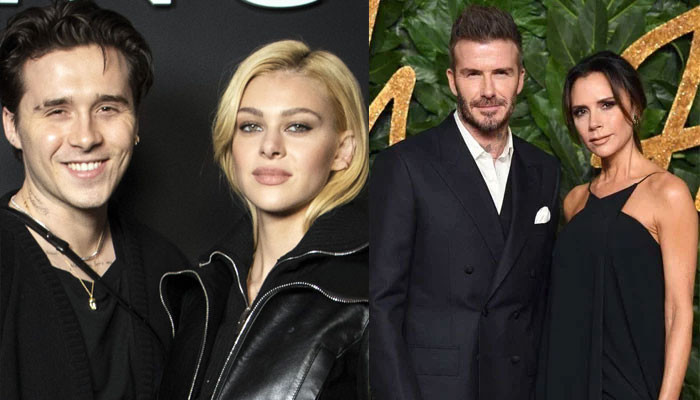 
David Beckham and Victoria Beckham are deeply concerned for their son Brooklyn Beckham, who keeps making sacrifices to please his wife Nicola Peltz.

The fashion designer and the former legendary footballer are worried for their first born as they believe his relationship with his wife is “unbalanced” and that Nicola would hurt him.

This comes after reports of feud between Victoria and the billionaire heiress were published by the media and that the alleged fall-out between the two began at Nicola and Brooklyn’s wedding.

Since then, Brooklyn has been snubbing his family by spending more time with his in-laws in Florida and did not even come for their luxury yacht trip during summer.

Adding to it is Brooklyn’s continuous tributes to Nicola in the form of body art and gushing social media posts that he often drops on his Instagram.

“They are worried that Nicola is going to hurt Brooklyn. They feel that the relationship is unbalanced,” the insider told Daily Mail.

“He makes a lot of sacrifices for her but it’s not clear what happens in return. But you know, as Victoria says: ‘He’s just gaga about that girl,’” the insider said.

Even Victoria, who said to have risen to fame with her Girl Power mantra, cannot fix the situation with her own son.

“It’s a waiting game,” the source dished. “She is doing nothing about it — she would be stupid to even try.”

However, the fashion designer has taken a step to finally end the alleged feud as she has reportedly invited Brooklyn and Nicola to her Paris Fashion Week show at the end of the month.

“Everyone is invited, including Brooklyn and Nicola,” the source disclosed. “Although it’s not definite yet that they will come.”