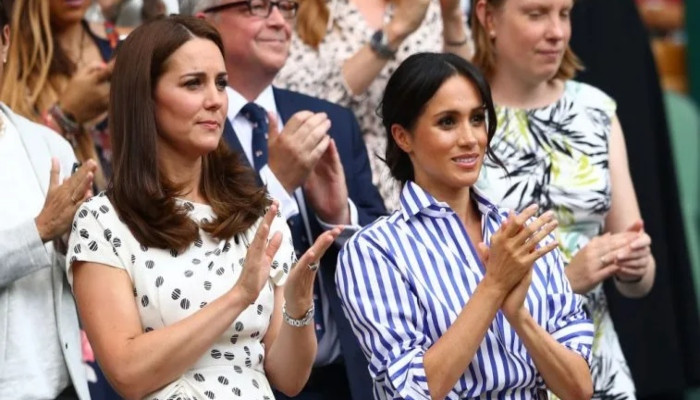 
Meghan Markle returned to the UK with her husband Prince Harry to attend several charity events. She delivered her first public speech at the One Young World Summit in Manchester since she stepped down as a senior royal in 2020.

The Duchess of Sussex received mixed reaction from the Britons and royal experts as her recent address came after her explosive interview with the American magazine, the Cut.

In her interview, Markle took a brutal dig at the Royal Family and British media, which landed her in hot waters as many criticized her later.

Meanwhile, some inside sources have allegedly claimed that the duchess of Cornwall and Cambridge, Kate Middleton finds it comfortable as Markle has been hit with fresh criticism.

Sources said Kate has remained silent for over a year since Markle accused her of making her cry at the wedding in the Oprah Winfrey bombshell interview.

“Kate is very calm and not one to make a fuss, but there’s only so much she can take and part of her is struggling to stay quiet – it’s been nearly two years of these constant attacks,” the insider told Closer magazine.

The source further said that Kate “almost always finds a way not to rise to any outside stress or negativity of any kind. But this is a tough one to swallow, and she has felt like there have been digs made at her personally.”

An insider revealed that Kate has reportedly “taken comfort from reports” that Markle “is losing her popularity with her American fanbase.”

“She’ll see it as some kind of sweet revenge that her latest comments have seemingly backfired – the response has been quite surprising – it’s almost as if Meghan’s caused her own downfall,” said the source.

Queen Elizabeth described her death place 'paradise in the Highlands'