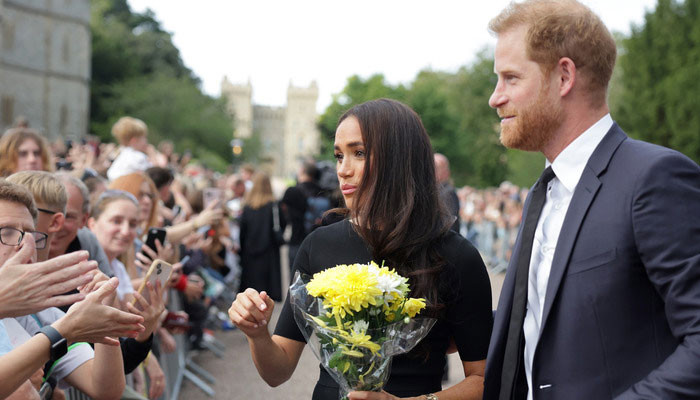 Meghan Markle is trending on Twitter after her interaction with royal admirers outside Windsor Castle.

The Duchess of Sussex accompanied her husband Prince Harry and his brother Prince William to read tributes for the Queen. The group was also joined by Kate Middleton.

During the 40-minute session with the public, Meghan was allegedly spotted curtseying to a royal staff member as she took a flower bouquet from a fan in the crowd.

“I told them I’d place them over there so it’s OK. Thank you. I appreciate it though,” said Meghan as a royal commentator.

Reacting to the video, Sussex fans on Twitter jumped on the bandwagon to defend the Duchess.

“How have they intimidated Meghan that she’s nervously curtseying to American palace staff,” wrote one.

“I’m baffled every time the world is expected to believe SHE is the bully…,” added another.

“Absolutely haunted by that video at the end of the Windsor walkabout and how nervous Meghan Markle looked, how anxious not to put a finger wrong and incite the ire of an entire national press corp,” wrote a third.