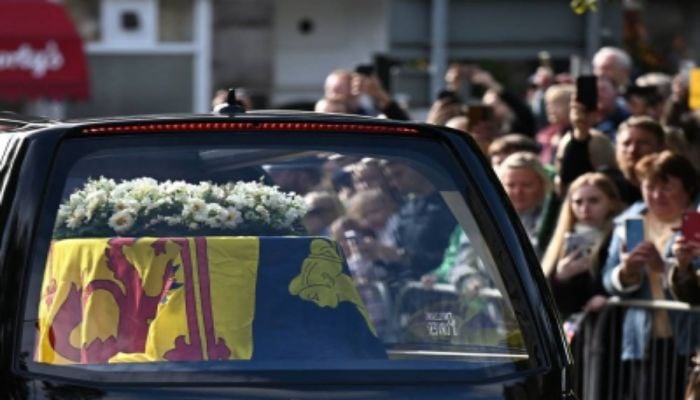 A perfect silence greeted Queen Elizabeth II’s cortege as it passed through the remote Scottish village close to her beloved Balmoral Castle today, with thousands lining the streets to pay their respects.

Some threw flowers as Elizabeth’s coffin — draped in the Royal Standard of Scotland with a wreath of white heather, dahlias and sweet peas placed on top — wound its way through the sun-bathed countryside.

Fittingly, the first to see the coffin were the villagers of Ballater, where Elizabeth spent many happy times during her summer retreats from the burden of queenship.

Members of the public, some wearing traditional Scottish dress, mixed with local dignitaries, members of the armed forces and church representatives on the streets of the quaint village, falling totally silent as the coffin passed by.

Queen Elizabeth II’s coffin will travel by road through Scottish towns and villages on the way to Edinburgh in a journey expected to last at least six hours.

The seven-car cortege left the estate gates shortly after 10:00 am (0900 GMT), moving past the mass of flowers left there since the queen’s death was announced on Thursday.

What began as a few local mourners coming to pay their respects at Balmoral in the first hours after her demise, grew to crowds over the weekend.

The hundreds of bouquets, which included roses, lilies, Scottish thistles and sunflowers, were interspersed with cards and gifts.

“Thank you for being you,” read one card left in the sea of ​​flowers.

Another, bearing a poem by Scotland’s national poet, Robert Burns, said: “My heart’s in the highlands.”

Near the iron railings sat a stuffed Paddington Bear, the much-loved British children’s book character, who shared a cup of tea with the queen as part of televised celebrations for her Platinum Jubilee in June.

Janice Hollis, from Essex, was visiting her sister in Scotland when she heard the news of the queen’s death and decided to travel to Balmoral.

The 72-year-old said she had experienced “complete shock, I didn’t believe it”.

Mark Lindley-Highfield, a 47-year-old from Inverness, said coming to Balmoral to pay his respects to the queen was “something I knew I had to do”, arriving at the castle in full morning dress.

“To pay respects to her in that traditional way was a way I could say thank you for everything she’s done,” he said.

Marina Hermant, a French tourist, had been on the Isle of Skye off Scotland’s west coast when she heard the news of Elizabeth’s death and rearranged her plans.

“She’s not necessarily our queen, but she’s kind of the queen of everyone, in the whole world,” she said.