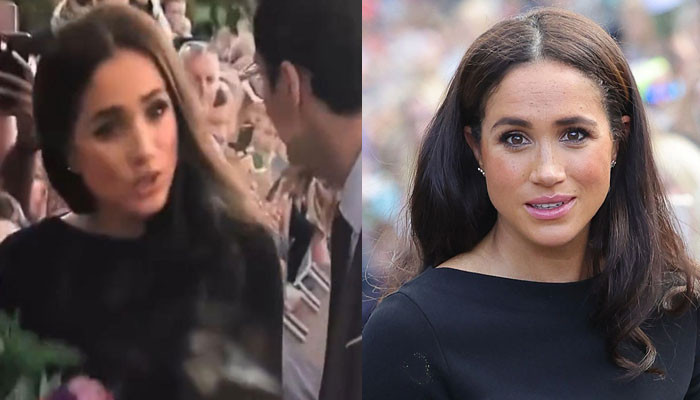 Meghan Markle has been going viral on social media after the Duchess allegedly interacted with a palace aide rudely.

The Suits alum, joined by her husband Prince Harry, Kate Middleton, and Prince William, greeted a crowd of mourners gathered outside Windsor Castle on September 10.

A video from the occasion has been making rounds on Twitter in which Meghan can be seen with a bunch of pink roses in her hand.

As she talks with the mourners, an aide asks her something from behind and the Duchess whirls around quickly with a look of annoyance on her face, claimed netizens.

Meghan then says something to the aide while pointing in one direction before she smiles and turns back towards the crowd.

“Don’t know what it was about, but she certainly looks dismissive and rude,” one Twitter user wrote.

“See how her anger flashes across her face briefly? Then she remembers and says thank you to the poor person trying to help her. Why the rush? Where’s the fire? Did she discover a camera NOT trained on her?” a third viewer wrote.