Karakoram Highway, the eighth wonder of the world during its construction had cut hands

by News Desk
in Gilgit-Baltistan
Reading Time: 6 mins read
A A
0
0
SHARES
Share on FacebookShare on Twitter 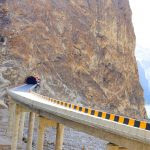 People had heard the name of the truck that it is a big thing and they used to think that if a big truck arrives in Gilgit-Baltistan, where will it be placed in the market?

When the jeep arrived at the main bazaar, an old woman, expressing sympathy, placed a bundle of hay in front of her.

He thought it was a living thing like a horse that has been on foot for some time now and would be tired now. ‘ Whenever something new or technology arrived in their area, it would resonate with the locals. Before the construction of the communication system consisting of roads and highways, most of the northern parts of the country, including Gilgit-Baltistan, were cut off from the world. The way of life of the locals here was centuries old. But the biggest reason for the change here is the construction of Karakoram Highway which is the ‘highest paved road’ in the world.

The highway enters Pakistan at the site of Khanjarab Pass and then passes through different parts of Pakistan and joins the GT Road at Hassan Abdal. General Cheng Bao was the Chinese Ambassador to Pakistan from 1958 to 1958. After the 1965 war, when the then Chief of General Staff of the Pakistan Army went to China to thank him for providing defense equipment and cooperation, the then President of China also said these words. The construction of a highway was mentioned, “If there was a better land route between Pakistan and China, this aid could have flowed in a better way.”

The foundation of this 1300 km long highway was the ancient Silk Road. 887 km of this highway is in Pakistan while more than 400 km is in China. Every step from planning to construction of this highway was a challenge. The Pakistan Army’s public relations department has recently released a documentary on the construction of the highway, which also shows some rare scenes from that period. As a result, more than 800 Pakistanis and 80 Pakistanis working on the road have been affected by the severe weather, heavy snowfall and landslides.

More Chinese citizens were killed during various stages of construction. During construction, Karakoram Highway was divided into four sections. The first was from Abbottabad to Batgram, the second from Batgram to Thor. The third part was from Thor to Gilgit while the fourth part was from Gilgit to Khanjrab. The 492 group was responsible for the road from Besham to Gilgit and the other group was responsible for the road from Gilgit to Khanjrab. Two new battalions were also formed during this time. Passing through Mansehra, Besham, Dasu, Chilas, Jaglot, Gilgit-Hunza, Nagar, Sost and Khanjarab Pass, it ended in Kashgar, a popular area of Xinjiang province. The airfield was set up with the help of an American company and the runway was strengthened. Other equipment was then flown there by PIA’s chartered flights. But even then the first work was started with counting shovels and small tools.

Officials working on the project say that its ‘pilot cut’ (initial work) was done with counting shovels. Eight thousand tons of dynamite was used for the construction and 30 million cusec meters of rocky mountains were cut down till the completion of the highway. Lieutenant General (retd) Javed Nasir “I was called in June 1966 and told that you were being sent on a foreign tour and that it was a long visit,” he said. It was said that I had to go to China, but I was not told that I was in charge of the road construction team. ‘ To bring Gilgit. I said that if you want to bring it here from China, then this area will be at an altitude of more than ten thousand feet. Tell me the name of the place so I can see the height of the area on the map. So he smiled and said that now you have to find the dagger in the map.

The next day, with great difficulty, Khanjarab was found to be 16,500 feet high according to the map, ”he said. But none of the officers and men stationed here knew what the area was like and what kind of population it was. ” Lack of resources was the biggest problem. In the early days, there were incidents where some of the personnel stationed here had to cut off their hands due to frostbite. I will die.

Sajid Basir Sheikh who commanded in the early stages of road construction as the captain says that in the area under his command ie in Kohistan ‘it seemed that people were in the Stone Age at that time. Even bread was baked on rocks. ”At first, they were scared, but when they got jobs, started getting paid and their way of life began to change, it was a big change for them. And then their conditions got better. ”And this is the change that Gilgit-Baltistan historian Yousuf Hussainabadi is talking about. The construction of the highway changed lives here. During the three summer months, two or three vehicles used to run here.

Three jeeps also arrived here because at that time the Army and Civil Department had built locally unpaved roads. ”When the Karakoram Highway was built, the area around Gilgit was also connected to other parts of the country. Then tourism grew, business expanded and people grew. ”According to official figures, the average literacy rate in the area around the Karakoram Highway was 14% in 1981, up from 37% in 1992 and 52% in 2012. In 1981, the literacy rate among women was only 3%, but in 2012, 36% of women were studying in educational institutions.

In the same way, big changes have taken place here economically. Sayyid Muhammad Kazmi says with reference to sitting in the car for the first time, “When I sat in the car for the first time, I felt as if I was flying in the sky. Even though I knew I was on the ground, the car was on the road. But even so, I felt like I was flying in the air, with great joy and surprise. “It was almost the same impression most local elders had.” There were many who had never seen a car, some people had gone to Karachi and they were used to cars but especially women, who had nowhere to go, it was a strange and strange thing for cars to come here. Syed Muhammad Abbas Kazmi likens this road to a window in a closed room and says that “before the road this area was cut off from the rest of the world.” Area With the construction of the Karqaram Highway, it now feels as if a window has been opened in a closed room. A big change has taken place.

The Karakoram Highway connects us to the wider world, “he said.” Big cars, buses, trucks are coming, business is booming, tourism is booming, people are coming and going and our own people are getting education and jobs. Reached other parts of Pakistan for That is God’s mercy for us.