by News Desk
in Gilgit-Baltistan
Reading Time: 2 mins read
A A
0
0
SHARES
Share on FacebookShare on Twitter 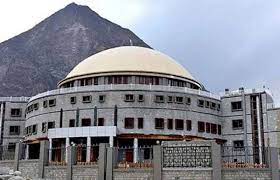 Gilgit (Azadi Times Correspondent) An important meeting of all opposition members of Gilgit-Baltistan Assembly was held under the chairmanship of Leader of Opposition Amjad Hussain at the office of Advocate Opposition Leader.

Opposition members Rehmat Khaliq, Nawaz Khan Naji, Ghulam Muhammad, Ayub Waziri and Sadia Danish attended. In the meeting, it was demanded to hold a meeting with the Reforms Committee formed regarding the interim constitutional province of Gilgit-Baltistan and take it into confidence.

Expressing concerns over discrimination against opposition members in Gilgit-Baltistan development projects, the meeting hoped for a speedy, equitable and just decision from the Supreme Court. In Gilgit-Baltistan’s development budget, Rs 8 billion has been set aside in the discretionary fund of the Chief Minister which is being used for political purposes, which is a clear violation of the decision of the Supreme Court of Pakistan.

Due to incompetence and lack of seriousness of the government, Rs.1.5 billion was released from the budget of Gilgit-Baltistan for the purchase of substandard wheat which is totally rejected. It continues to be delivered to the public as soon as possible. In all the institutions of Gilgit-Baltistan, especially in the Disaster Management Authority and Sony Gambling Center, vacancies have been filled without any advertisement on the list provided by the Chief Minister.

The meeting demanded that despite the notification of new districts, the government has not shown any interest in activating these districts administratively yet.