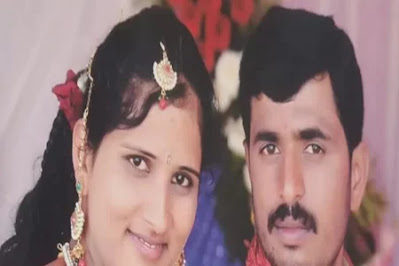 New Dehli: (Azadi Times News) Shivakumar attacked his wife Chaitra when she went to the washroom of the court, Shivakumar followed the wife and there he cut her throat with a sharp instrument.

After the incident, the accused tried to escape, but the people present in the court caught him and handed him over to the police, while Chaitra was rushed to the hospital with serious injuries, where she died during treat

ment. An FIR has been registered on the charge of murder.

Police officials say that this incident took place in the premises of the court. We have taken the accused into our custody.

The weapon used for the murder has also been recovered from the possession of the accused, during the investigation of the case it will be clear what happened after the counseling session, and how Shivakumar managed to get the weapon inside the court.