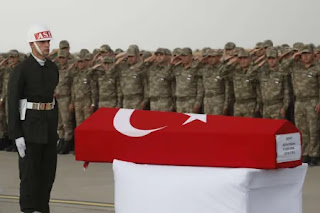 Idlib: 3 soldiers killed and 3 wounded in attack on Turkish soldiers:

According to reports, armed men attacked Turkish soldiers during a search operation in Idlib, as a result of which 3 soldiers were killed and 3 seriously injured.

Has confirmed that Turkish troops have been attacked in Syria. The bomber struck shortly after noon in front of a Turkish military base in the northern city of Idlib, killing at least three people and wounding three others, the defense ministry said in a statement.

The area where the Turkish troops were attacked is the last stronghold of the rebels, for which a team of Turkish troops was engaged in a search operation. The dead and wounded Turkish soldiers have not been identified yet.

It should be noted that Turkish troops had entered Syria for an operation against Kurdish rebels, but as a result of a ceasefire agreement reached in March last year, Syrian and Russian forces are conducting surveillance operations.