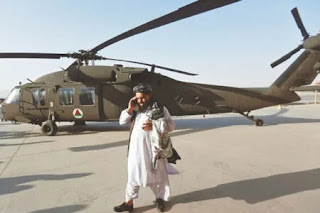 Us 85 billion worth of US goods are now in the possession of the Taliban, which is 10 times Pakistan’s defense budget. Billions of dollars worth of US military equipment has gone to the Taliban:

He said the remaining military equipment in Afghanistan includes 75,000 vehicles, 200 planes and helicopters and 600,000 small and light weapons.

The Congressman said the Taliban now had more Black Hawk helicopters than 85 per cent of the world’s countries. Listen to the world: If anyone attacks Afghanistan after August 31, we will stop, Sohail Shaheenbanks added that if any of these weapons or any of these military equipment is used now or in the future at any time.

If used to harm, injure or kill an American, his blood would be on the hands of US President Joe Biden. He said it was all due to the negligence of the current government. The Biden administration has no plans to bring all this equipment back from Afghanistan now or in the future. The US government is not even thinking about how the Taliban will use the equipment.

Initially, 12 names are being considered. Reports from Kabul said the council member said appointments would be made for the judiciary, internal security, foreign affairs and defense. Abdullah is pushing for the involvement of some members of previous governments, including Abdullah.

The 12 names for the caretaker government’s cabinet have been unequivocal by the Afghan Taliban, which has no right to interfere in Afghanistan’s affairs.

The US drone strike in Har is reprehensible, Kabul airport will soon be completely under Taliban control. A spokesman for the Afghan Taliban said it was too early to say anything about Turkish or Qatari assistance for airport security.

A spokesman for the Afghan Taliban said that work was being done to resolve the currency crisis and economic difficulties, adding that the United States, Britain and other European countries should maintain diplomatic relations with Afghanistan.