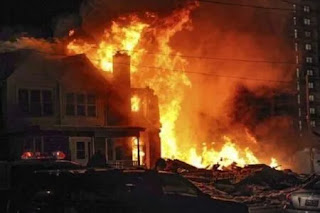 According to reports. A bomb blast near the Chinese port city of Dalian has killed at least eight people and injured dozens more, officials say. A terrible fire erupted with the explosion. There was chaos and stampede in the apartment.

Rescue agencies began rescue operations and evacuated the victims. About 20 people have been shifted to a nearby hospital where eight people have been confirmed dead and five seriously injured while the rest were allowed to go home after medical aid.

Fire brigade personnel spent two hours. Efforts were made to contain the fire, but significant financial losses were incurred. An inquiry committee has been formed to determine the cause of the accident, but initially it was said that the blast was caused by a gas leak.