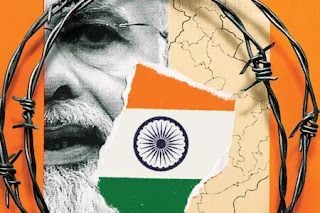 India’s Global Democracy Index has reportedly declined 26 places in the last 6 years. India ranks 27th to 53rd in the Democracy Index, according to a Freedom House report released in March.

Hindu nationalism has become the backbone of Indian democracy as Christians, Muslims and other nationalities have begun to lose faith in Modi’s specific Hindu democracy, the RSS has hijacked all government machinery and the Modi government’s decisions The SS have succumbed to the ideology

The RSS mindset is proving to be a poison for Indian democratic identity and Indian law enforcement agencies have also become shields in the extremist activities of RSS due to which Modi’s so-called democracy has given Indian secular identity, religious.

The alarm bells are ringing for tolerance, economic and social values and maintaining India’s identity in the United Nations through its extremist democracy has become a challenge.