By News Desk
Share
Facebook
Twitter
Pinterest
WhatsApp
Linkedin
Email
Print
Telegram
In this column i will tell you about what is Line Of Control, (LOC) its backround who draw this Line in the Bottom of State Jammu Kashmir, after the British, Government,  what Happend in the already Independent State JK, now what is happning on this this Line and how people are dying both side of this illegal line of Control.

Reality of Line Of Control Jammu And Kashmir

You may have heard the 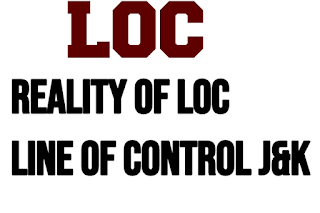 name LOC many times and also how the situation on LOC is because you often watch such news on social media internet on Facebook and on your home TV every day but do you Know what LOC is, when it was imposed and what people who have this LOC think about it and the people there value the Line of Control for them. Today we will tell you. In order to fully understand what LOC is, when it was implemented, what are its advantages and disadvantages, you should read our post which we have prepared after a lot of hard work and you should understand it. What is this LOC?

When the British rule in the subcontinent ended in 1947 and two new countries, India and Pakistan, became an independent state, Jammu and Kashmir was an independent country that had been running its own system of government for many years.

But when the British rule came to an end and two new countries, India and Pakistan, were formed on August 14 and 15, 1947, the integrity of the state of Jammu and Kashmir began to be threatened.

A few days later, when India and Pakistan became independent on August 14 and 15, a dangerous attack was carried out on the state of Jammu and Kashmir by the tribesmen in the month of October, which was the biggest attack of that time. We have already told you in the previous post which Pakistani was active in carrying out this attack.

When a large part of the state of Jammu and Kashmir was attacked by the tribesmen, it was a very dangerous attack in which children, the elderly, mothers, sisters and the sick were not spared. When the king of the state heard of the attack, he Ordered the army to remain alert but came with attack and so many modern weapons that the mother king’s army retreated in front of them

When the Maharaja learned of the attack that his army was being defeated and needed help from another state to save the state, he decided to seek help from the Indian Army. The Maharaja wrote a letter to the Indian government. Sent in which it was written that the state of Mara Ja has been attacked and needs military assistance.

if you want to know what is Article 370 click below:

On October 27, 1947, the Indian Army was deployed in the state of Jammu and Kashmir.

When the Indian Army reached the state of Jammu and Kashmir, the Pakistan Army had already occupied a large part of the state including several major cities like Gilgit-Baltistan, Muzaffarabad and Mirpur.

When the two armies came face to face, a new war broke out. The two countries were newly liberated. The two armies openly showed their strength to each other. Was not at fault.

When the news of this war reached the world, the UN Security Council ordered a ceasefire between the two countries and the two forces were stopped as far as they had control.

And a line Line of Control  has been drawn between them which is called the Line of Control. The people who live on both sides of this line are Kashmiri. They are relatives of each other. The bloody line says that since 1947 till today this line has taken the lives of millions of people, millions of houses have been burnt down, millions of innocent children, old women, people living on both sides of this line have paid this price. These people are kept away from each other.

Every day the two forces fight each other. Artillery guns are used and Kashmiris living on both sides die. But their game has been going on for the last 72 years. They don’t care. The international community is also holding hands.

These two countries trade and play with each other. These two countries share thousands of kilometers of borders but never a single bullet is fired anywhere but in Kashmir they face each other 10 to 15 times a month. They come and heavy machine guns are used. Millions of people die. No one cares.

Kashmiris have been demanding their rights for decades but no one is ready to listen to the voice of the people of Kashmir.

Muharram preparations are in full swing in Jammu and Kashmir

25% discount on hotel fares from 1st to 15th August

Prince Harry and Meghan’s Netflix deal will ’cause untold damage’ to...