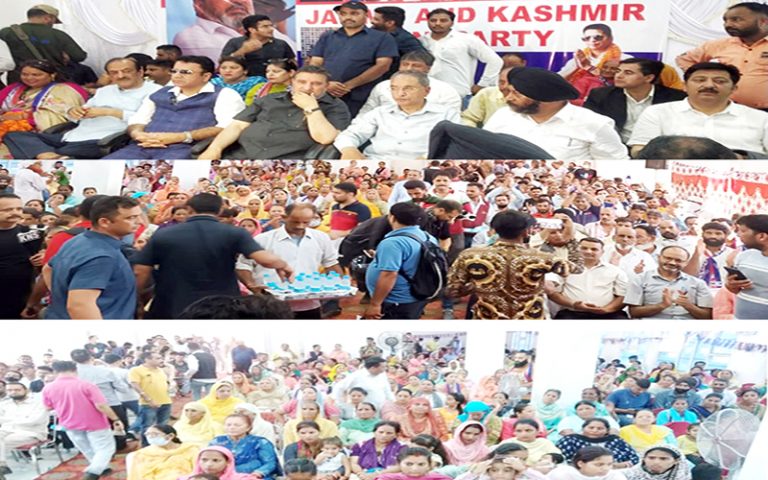 Azadi Times: He said that the people who gave a heavy mandate to this party were exploited by BJP with emotional slogans and marginalized in terms of construction and development. Bukhari mentioned these things while addressing the convention of his party workers held at Shaheedi Chowk Jammu on Saturday.

I am grateful to those who welcomed us in this historic city, as I was coming towards Residency Road I remembered the days when this city was the heart of Jammu but it was cut into pieces, we have seen our childhood on Residency Road but this Government destroyed Residency Road which is unfortunate. Unfortunately they (Bharatiya Janata Party) claim to represent the aspirations of Jammu and Kashmir but in practice nothing of the sort is visible. Seeing the desolation of the historic city and the famous Residency Road, one can see the authenticity of their lofty claims. Expressing concern, Bukhari questioned the leaders associated with the ruling party and said, “Did the people of Jammu give them a mandate to end the 100-year-old tradition of Darbarmau, to close the business of Jammu?” Criticizing the BJP for exploiting the people with emotional slogans, he said, “They (BJP) have played with people’s sentiments, destroyed the magnificent Raghunath Bazaar, Jammu’s business and tourism sector. ruined Starting trains from other parts of the country directly to Katra has badly affected the business of Jammu and no effort has been made by the government to make the tourist attractions in Jammu a tourist attraction.

Altaf Bukhari said that BJP was claiming that Jammu was facing problems due to the abrogation of Article 370 and Article 35A, so they revoked the special status and claimed that it would end discrimination, but something happened. No, but only he fulfilled his 60 years old slogan.

Addressing the people present at the convention, he asked, “Have you seen any positive change after August 5, 2019? Today you are witnessing the situation that Jammu city has turned from bad to worse,” he added. The situation in Jammu and Kashmir will be better only if the politics of traditional political parties BJP, Congress, National Conference and PDP are uprooted because they are responsible for the present situation which has been based on religion, region, Caste, Autonomy, Self-Role, Ek Nishan, Ek Vidhan and other emotional slogans have exploited people while there is no truth in their claims. “My party wants to unite the people of both the regions and give them representation according to their wishes,” he said. The situation has worsened in the departments. There was no Kashmiri in this government, yet the people of Jammu are suffering badly. Affected, BJP and Congress parties are responsible for dividing the people of Jammu and Kashmir into two regions and creating mistrust. These two political parties have been in power for the last 70 years but they have not developed but they have been busy in the transfer industry. He said to the people, “Are you worried about the education system, the poor infrastructure and the renovation of school buildings?”

Do you know that 90% of government girls’ schools do not have toilets? Electricity is a serious problem. Despite the various problems in Jammu, he never raised these issues but the BJP was always busy changing SHOs, Tehsildars and government officials. “Our state was divided into three parts,” he said. One part was given to China, one part was made Ladakh Union Territory and the other was made Jammu and Kashmir UT.

People should listen and understand that the BJP has emotionally abused them, apart from doing nothing for the people after getting the mandate. Therefore, your party should be given a chance so that it can provide justice to the people of both the regions. He also condemned the granting of domicile to people who have lived in Jammu and Kashmir for 15 years and said, “The government is not allowing the permanent citizens of Jammu and Kashmir to hold the ‘Permanent Resident Certificate’ which is our identity.”

Altaf Bukhari questioned the BJP, which is claiming to be the Chief Minister from Jammu, saying, “It is the same BJP that came to power with the PDP, which contested the elections against the same party in Jammu and got the mandate of the people.” what was They have done nothing except ending the special status, erasing the Dogra identity, degrading the state status and dividing the historical state into two parts. , will do justice to the people of Jammu and Kashmir by ensuring protection of jobs, protection of natural resources, if their party comes to power, non-locals exploiting natural resources will be moved from Lakhanpur.