Amjad Hussain Barcha, a senior journalist from Gilgit-Baltistan, was arrested by City Police District Gilgit last night on the orders of DIG Range 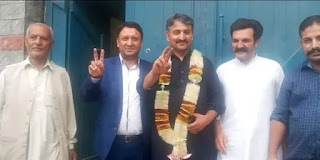 Senior journalist Amjad Hussain Barcha broke the news on social media after which on the orders of DIG Range, City Police District Gilgit arrested him from his house last night and shifted him to Gilgit.

Protests were staged against it not only in Gilgit Press Club but also in all GB districts including Hunza Press Club. Political and social circles, including journalists, also participated in large numbers on the occasion and reacted strongly to this illegal and frivolous move of the Faiz Officer in charge of the Gilgit-Baltistan Police Department.

He described it as “a retaliation against a single individual” and a “failed attempt to curtail freedom of the press” and to cover up his misdeeds.

President Hunza Press Club, representing all the journalists, demanded a two-point agenda. No. 1 Full Four Release The senior officer Amjad Hussain Barcha demanded an apology from the concerned officer and No. 2 demanded that an investigative report be prepared against the occasion.