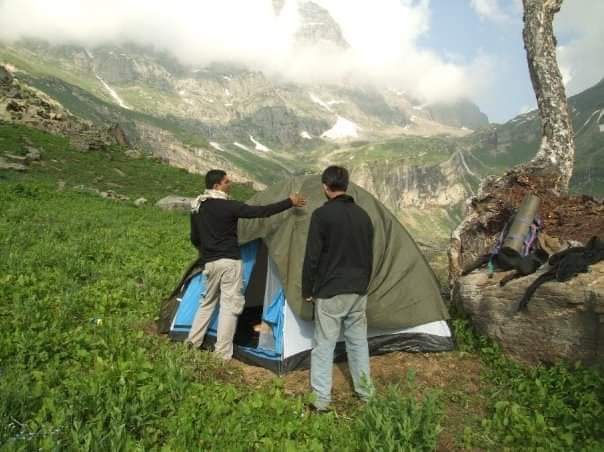 This time my intention was to make the intense heat of wow more. The wife thought that the long journey would be tiring and our princess Hafsa is only four months old. I said no matter if she will travel from now on, she will know the world and the heat of the clinic anyway. I want to get out of this monotony and spend some days in your Kashmir. Let’s touch the clouds in your Kashmir.

This journey to an area like Chakar of Jhelum will not be tiring but will be a source of mental and physical energy. So on August 6, we left for Kashmir … The destination of our trip was Kashmir whose valleys and mountains with all their deserts satisfy the tastes of the tourists. I am personally interested in the history of Kashmir as well as the geography of Kashmir.

In the city of Muzaffarabad, on the right side of the Quaid-e-Azam Bridge, locally known as the Two Mile Bridge, along the former Generali Road, known as the Muzaffarabad-Srinagar Highway, extends on both sides of the Jhelum River to Lake Dal Srinagar. When you come to this road, after a while, pleasant cool and drunken winds send the message that you are going to the land of clouds.

As if yes I have to touch the sky. Ride me on the clouds. Chakar was drowned in the clouds. The aroma of the rain-soaked alpine forests wafted through the veins

Chakar is a very beautiful and healthy place. To reach this beautiful and attractive place about 50 km from Muzaffarabad, the capital of Azad Kashmir, on the right side of the Quaid-e-Azam Bridge in Muzaffarabad or commonly known as Doomil Bridge on the Srinagar Highway and holiday towns Passing through the village of Dhani Baqalan, about 35 km away, turn right at the heights on the right side towards Chakar, which is 15 km away from here.

Pothi Bazaar is a few minutes away from the bustling bazaar of Chakar. From where a road turns down which leads to Bagh District Azad Kashmir while from the same place a road goes upwards which leads to Noon Bagla and Rahim Kot. From here Noon Bagla is located about 10 km up. And Zalzal Lake is located at a distance of 3 km. Along the way there is also a fish hatchery along with Hill View Resort and Guest House. The summer season is very pleasant.

You are surrounded by clouds for hours. That is why this tehsil of District Hatian Bala is also called the land of clouds. From here Ganga peak and on the other side Koh-i-Nag peak can be seen perched in the clouds. Three places in Chakar are worth seeing. Earthquake Lake (Ataabad-like lake created as a result of the 2005 earthquake in an area of three and a half kilometers).

Noon Bagla is located at a considerable height of ten kilometers from Bagla Chakar. This 10 km journey is full of very beautiful scenery. There is a beautiful track above Noon Bagla This track is surrounded by very beautiful pine forests which go up to the top .. At the end of Zalzal Lake The water of the lake falls down in the form of three waterfalls.

And to its right is another lake formed as a result of an earthquake called Bani Hafiz Lake … Our next journey was from Chakar to Noon Bangla or Bagla.

Noon Bagla is located on a track about 10 km above Chakar Bazaar, full of pine, pine and walnut forests. The village is known throughout Azad Kashmir for its natural beauty. Located on a 10 minute trek from Noon Bagla Bazaar, Noon Bagla Top is no less beautiful than any other tourist destination in Jammu Kashmir.

It is also called Mani Arang Khel. From this place you can enjoy the views of Lepa Valley, Pandu, Ganga Peak, Zalzal Lake, and Curly Chakar on one side and on the other side you can see the beautiful peaks of Mount Qazi Nag. Can also be enjoyed. In some places in Noon Bagla, there are rocks which are also called natural air conditioners by the locals because these rocks continue to emit naturally very cold winds all the time like AC running underground.

Located on the banks of a small spring made of springs, surrounded by skyscrapers and natural forests, this plain covers an area of about 600 kanals and covers the valley of Noon Bagla for four months. Is. Camping at this place on moonlit nights is by no means the best and most beautiful experience of life. About 25 minutes trekking from this field is a very beautiful place called Dangian which enchants the tourists every year with its natural beauty. The most important and unique feature of Noon Bagla is the cool and freshwater springs here.

There must be a fountain outside almost every house in Noon Bagla, the number of which is about 30. God, the spring is more beautiful … The Nun Bagla season is a tourist hotspot almost all year round. In winter, there is 4 to 5 feet of snowfall in the months of December and January and even in summer, the temperature here is usually 10 to 20 degrees Celsius. Tourists visiting Jhelum Valley should take a day off and visit Noon Bagla. This beautiful place, the beauty of the whole of Azad Kashmir, is waiting for your arrival.

Zilzal Lake Muzaffarabad On the right side of Chakoti Road from Chakar Sadhan Gali Road on the way to Ganga Peak, you can see a beautiful lake at Kadli, which looks enchanting in the depths between the mountains. If not, let us tell you the route of the earthquake lake and some important information about it.

This lake was created due to an accident. You will know that on October 8, 2005 an earthquake occurred in Kashmir and Pakistan. During the same earthquake, a slide fell in Kadli, a village adjacent to Chakar area of Muzaffarabad and the whole village was hit by the slide and due to which seven hundred to twelve hundred people were under the slide. Due to the slide, the natural canal consisting of water coming from the heights of Noon Bangla was blocked and its water filled the entire valley, thus this lake came into existence because this lake was caused by an earthquake. That is why it was named Zalzal Lake.

The lush mountains around the lake, dense trees and. There are beautiful villages that offer beautiful views, the water of this lake falls in the form of three waterfalls. These three waterfalls offer a beautiful view against the backdrop of dense forests. This water flows into the Jhelum River in the form of a drain at the beginning of Hatia Bala Bazaar. So the earthquake of Lake Chakar and Kashmir can be one of the famous tourist destinations of Pakistan.

The two waterfalls of Saji Kot Havelian are famous all over the country while there are three waterfalls of this lake. But unfortunately, due to the inattention of the institutions, this lake, despite its beauty, could not get the status of a regular tourist destination. Most tourists find it safe to see it from afar. For a while, it was considered a sin to go on tourist activities. It has been going on and it is being considered as a warning sign because it was caused by an earthquake and 1200 people were buried under it.

This lake and its numerous tourist destinations around it, due to the inattention of the concerned institutions. There are also hunters, one of which is Bani Hafiz Lake. On the road from Bani Hafiz Lake to Sadhan Gali where the first view of Zalzal Lake is seen, there are houses with beautiful red roofs in the dense forest on the hill across the lake. This area is called Bani Hafiz.

At a depth of two thousand feet from Bani Hafiz, between the high mountains, the water flowing from the sides of Ganga Choti, Ganga peak forms Bani Hafiz Lake. Then after going a little further, these earthquakes join the waters of the lake and go to the river Jhelum at the place of Khatian Bala. There is also a shortcut way to see Bani Hafiz Lake and Zalzal Lake and waterfalls in one day.

Take a walk, then sit in a boat and go to the other side of the lake. After visiting the lake and waterfalls, you can go back to the other side of the lake in a boat. We stopped using the boat route and went to Bani Hafiz, so there was no time left to meet our relatives, to go down and touch and feel the lake Bani Hafiz and the waterfalls. It was evening and I had to come back from the top of the mountain with pictures.

Azad Kashmir Assembly Candidate: Zeeshan Haider, made serious allegations against the Prime Minister of AJK for corruption, and violation of merit