by News Desk
in JKLF, story
Reading Time: 3 mins read
A A
0
0
SHARES
Share on FacebookShare on Twitter 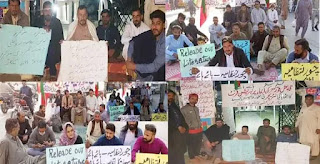 The protest will not end without taking back the literature.

Pakistani institutions are engaged in human rights violations in the state. Azad Kashmir and Gilgit-Baltistan have been made pastures for Pakistani security agencies. Liberal workers in jobs face pressure and intimidation from agencies. Pakistani officials go to government, semi-government and private institutions and threaten them.

Freedom of speech and expression is being curtailed through bullying. Military personnel are forcibly making children Pakistanis by holding ceremonies in educational institutions. The face of Pakistan’s rulers and institutions is like the face of Modi.

These hypocrites have been exposed in front of the people of the state. End your occupation of the state of India and Pakistan. Zonal President Dr Tauqeer Gilani’s speech in protest. Liberation Front workers in Shaheed Chowk Kotli and Maqbool Butt Shaheed Chowk Dadial continued their protest sit-in for the 14th day against the removal of organizational literature and for the return of their literature. There were protests and slogans of incompetent administration, incompetent government, thieving administration, thieving agencies, return our literature.

Speaking on the occasion, Dr Tauqeer Gilani, Zonal President, Liberation Front, strongly condemned the attitude of the Kotli administration, saying that it was unserious, hypocritical and cowardly. Azad Kashmir has been practically turned into a pasture for the personnel of Pakistani agencies. Incompetent, patronizing, job thieves, unfamiliar with duties and Rashi administrative officials look helpless and helpless in front of the occupying forces personnel due to their actions. Intelligence interference and bullying dominates the entire system.

Harassment of libertarian workers, intimidation of libertarians by going to departments and institutions, forcing officers to take action against them has become the norm among the officials of these institutions and continues despite informing the administrative officers. In Pakistan-occupied Jammu and Kashmir and Gilgit-Baltistan, everything called basic human rights is being eradicated.

Freedom of speech and expression has been curtailed. The Schedule IV in Gilgit-Baltistan, the so-called Terrorism Act, the Gilgit-Baltistan Governance Order and Act 74 in the so-called Azad Kashmir are clear and undeniable evidence of human rights violations. These black laws and neo-liberal acts are showing that there is no difference between the faces of Modi and Imran Khan. Just as India wants to usurp the state by force, so does Pakistan want to maintain its grip on the state by force. The sole purpose of the presence is to ruthlessly plunder the resources of Azad Kashmir and Gilgit-Baltistan. He said that the Liberation Front’s declaration of independence was a reflection of the same mentality of the security personnel in the state of Pakistan.

Dr. Tauqeer clarified that the Liberation Front would withdraw its literature in any case and protests would continue. He made it clear to the Indian and Pakistani rulers that peace in the region would never be possible without the complete and simultaneous evacuation of Pakistan and India from the state of Jammu and Kashmir. India and Pakistan should start withdrawing troops as soon as possible to minimize their losses.