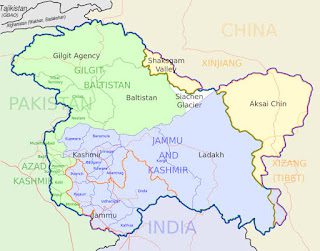 Azdi Times: Jammu and Kashmir (Kashmir or Indian Occupied Kashmir) is the northernmost Indian-occupied state, with most of its territory spread over the Himalayan mountain range.

Jammu and Kashmir is divided into three parts: Jammu, Kashmir Valley and Ladakh. Srinagar is its summer capital and Jammu its winter capital.

The Kashmir Valley is famous worldwide for its beauty, while the temple city of Jammu attracts thousands of Hindu pilgrims.

Ladakh, also known as “Sub-Tibet”, is known for its beauty and Buddhist culture. The state has a majority of Muslims, but Hindus, Buddhists and Sikhs also live in large numbers.

Kashmir is a source of conflict between two nuclear powers, Pakistan and India. Pakistan’s position is that being a Muslim majority state, it is a part of Pakistan under the Partition of India Act, while India considers it as its integral part.

The region has been declared internationally disputed. Indian-occupied Kashmir has a Muslim majority, with 95% Muslims in the Kashmir Valley, 28% in Jammu and 44% in Ladakh. Hindus are in majority in Jammu with 66% and Buddhists in Ladakh with 50%.

The Nobel Prize for Literature for 2022 goes to French writer...