Throwing acid on a woman in Muzaffarabad accused arrested 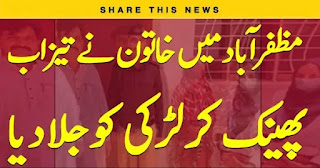 (Daily AMV Tribune) City police arrested the accused who threw acid on a woman. Term the accused in five hours was arrested.

An unidentified woman in a burqa was following him. The accused took the opportunity to swallow the acid. The accused fled after being run by the woman and the accused also snatched the mobile phone of the victim so that she could not contact him.

Arrested from The accused confessed that his daughter was engaged and that Metro, who is also a bettor, had taunted him for refusing to put on his daughter’s make-up, which made her feel guilty and committed the crime.