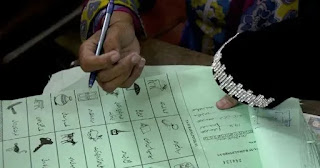 Muzaffarabad (Staff Reporter) Leader Jammu and Kashmir Awami Tehreek, former Minister for Tourism and Transport Muhammad Tahir Khokhar has said that a large number of fake votes have been cast in the refugee constituencies.

Migrants should be robbed of Kashmir rights and fake votes should be polled instead of real refugees. If the Election Commission opens the constituencies of Jammu 1 Valley 2.3, the mystery will be revealed. In some areas, the votes of those who have left the world have also been completed.

MNA and MPA polling We demand from the Election Commission to open these 3 constituencies, the whole reality will come out, kill our mandate at night. The desired results were obtained because the refugees did not have to vote for them. The facts of a PTI leader who made fake votes and when he did not do his job and gave it to someone else will soon be brought to the notice of the people, Tahir Khokhar said.

He demanded from the commission that our mandate has been stolen. We want these constituencies to be opened, the whole truth will come out.

Rs 500 billion has been decided in principle for tourism, communications, highways, construction of tunnels, public health, IT, agriculture, forestry and the