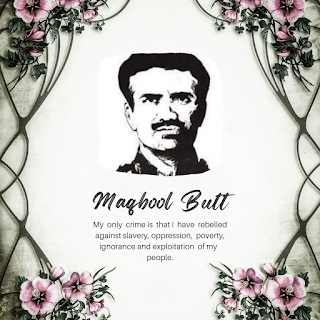 Today Kashmiris all over the world are marking the 38th day of martyrdom of freedom fighter Baba-e-Qom Maqbool Butt Shaheed:
Today 38th Martyrdom Day of the Martyred is It is urgent to convey the ideology, thoughts and struggle of Maqbool Butt to the nation in the right way. Maqbool Butt saying “My crime is the struggle against obsolescence, orthodoxy, capitalism, exploitation, slavery and hypocrisy.” Is the most serious crime “” We want friendship.
We do not want to recognize the supremacy of anyone. “” Freedom means not only the elimination of foreign domination from the sacred land of Kashmir but also the defeat of hunger, poverty, ignorance, disease and economic and social inequalities. The days will come when we will be free. Get rid of the feeling of slavery.
Break the chains of communalism and bigotry. “We have to build the independence movement on such lines that our cries are heard in the houses of peace in the resounding deserts and the desert and the desert are forced to bear witness to our bravery.” It brings not only the heretics but also the hypocrites into the realm of truth. ” We believe that one day the motherland will be free and we will be victorious Leave a hole in the wall of the gallows so that the wind of my vatam touches my body and testify yesterday that the popular butt was sacrificed for the freedom of his country. We have four enemies: 1 Indian Army and Indian Government Total parts that help perpetuate the aggressive occupation of the state 2 Circles of self-styled politicians in Pakistan who are the losers of American and Russian imperialism who do not believe in achieving national goals through mass movements 3 To be found in the Kashmiri nation There are elements who have a defeatist mindset or who are frustrated by a lack of trust and this condition hinders the organization of the movement, either poetically or unconsciously, or because of some vested interests. The role of the 4 international powers that are at the forefront of or supportive of imperialism and colonialism in the world.
It’s not a big deal to offer a view of souls in Laila. There has always been and will always be a need to jump into the fire of Nimrod to cool the embers of oppression that consume human blood circulating for the sake of health. ” Hardly any nation in the world would be free if we could weep.
If it were possible to eradicate the evolution of human civilization, democracy and freedom from the prevailing judicial or administrative traditions, then all the revolutions that have taken place in the world since the creation of Adam. They would not even exist. Absolute decisions on human welfare and liberation movements are made in the courts of evolutionary process of history, not in the existing courts themselves.
That is why such judgments are often rendered ineffective and obsolete in the light of the historical process. What could be a happier place for me than this, and what could be the oppression of time and the inconvenience of circumstances, not only because they have completely failed to extinguish these candles of fidelity, but also by the light of these lamps? Many more lamps are being lit. If this continues then the time is not far when the light of these lamps will enlighten the whole country and as a result the condition will be created which we can rightly call the lamp of freedom.
I see thousands of popular butts being born. The real national liberation movement will start after me. ” I would like to say to the ideological comrades that no matter how bad the situation may be, they should remain steadfast and keep striving for the attainment of common goals. ” Reorganizing the struggle while adopting Butt and decisive struggle is a matter of time Greetings to the everlasting historian and irrational struggle.

Chairman appointed in PDA for the third time in a year