by News Desk
in National
Reading Time: 4 mins read
A A
0
0
SHARES
Share on FacebookShare on Twitter 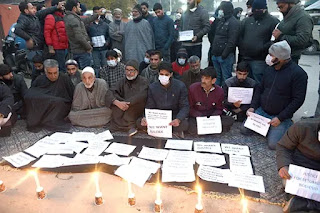 Srinagar: ( Azadi Times) The family members of Dr Mudassar Gul and businessman Muhammad Altaf Butt, who were killed in Haiderpura encounter, staged a sit-in at Press Colony on Wednesday and held a candle light protest in the evening:

My daughter calls Baba Baba. I don’t have the answer. Give me her body. ” Mudassar Gul (a month ago) ate together at a party with Srinagar Municipal Corporation Mayor Junaid Matoo, SSP and other bureaucrats. If he was a militant supporter then why did he eat with him. “He can’t do wrong and can’t spend wrong money on his family. If he was wrong, why was he not arrested?” He appealed to the governor to intervene in returning the body to him.

Rejecting the police claims, Abdul Majeed, brother of slain businessman Latif, said that he wanted justice, as if a film was being shot by the security forces in which he Killed his innocent brother, it is very shameful that innocent people have been killed in the encounter, my brother was called three times by the security forces and taken to the building for search, when they did not find anything Created an environment in which innocent people were killed.

Majeed said, “I appeal to LG Manoj Sinha to confirm all the facts about this encounter. “Unfortunately, he is a government employee and he stays in touch with the J&K police 24 hours a day because he is working as a numbered person,” Majeed said.

“If my brother was involved in militancy, I The police would have reported earlier but all the allegations of the police are false. My brother has been working on Haiderpura bypass for 30 years. He had his own complex with six shops. Majeed said that if the police had any information about their involvement in the militancy, they should have first contacted the concerned police officer of the area. “My brother was a builder,” he said. He was innocent and had nothing to do with the militancy. The whole area of Haiderpura knew him well. Go and ask him what kind of man Altaf Butt was.

Jammu // In view of the death of Sangdan youth in Haiderpura encounter, restraining orders have been issued to maintain law and order situation in Ram Bin Gol sub-division. Additional District Magistrate Ram Bin Harbans Lal Sharma has formally issued an order in this regard under number DMR / 1984-92, in which it has been stated that the District SP has been informed in writing. That they should take steps on the ground level for proper implementation of the order. The second will be enforced. It should be noted that the third youth killed in Haiderpura encounter belongs to Ram Bin.

The Lieutenant Governor assured Dr. Abdullah that the matter would be considered on a priority basis. Party vice-president Omar Abdullah wrote, urging that the bodies of the slain citizens be handed over to the next of kin. has been. Then how can these people be considered as fighters? They are civilians who were killed because they were put on a harmful path. He said that it was very wrong to call the slain civilians as fighters or helpers and then forcibly snatching their bodies and burying them in far north Kashmir was a crime against humanity. He said that the bodies should be handed over to the next of kin so that they could be buried. That’s the decent thing to do, and it should end there. Mehbooba Mufti protests against Haiderpura killings in Jammu News Desk Srinagar // In Jammu, PDP President Mehbooba Mufti along with party leaders staged a protest against alleged killing of civilians in Haiderpura clash. Mehbooba Mufti outside PDP office on Wednesday. Protested with party leaders and said that 3 civilians were killed in Haiderpura clash on Monday. “The government is killing civilians in the name of militancy,” he said. Mehbooba Mufti said, “It is unfortunate that 3 civilians were killed in the Haiderpura clash.

Former Minister Ali said that such incidents only increase the anger of the people against us. We demand a judicial inquiry into these killings and the culprits should be severely punished. Criticizing the BJP, Mufti said, “The BJP’s strategy of resolving the Jammu and Kashmir issue through military force is wrong. If the people of Jammu and Kashmir had bowed down to the Pakistani invasion in 1947, Mehbooba Mufti, meanwhile, was placed under house arrest on her return. According to the party spokesperson, they have been urged by the police to refrain from leaving the house.

Seven more educational institutions in Hattian Bala, Jhelum Valley will be sealed due to Corona virus. The spread rate will reach 13 percent.