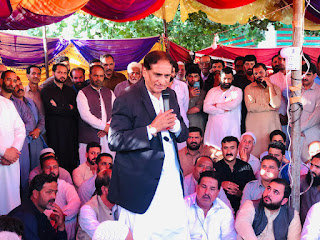 Leaders of various political parties, representatives of trade unions and people belonging to other schools of thought came to the camp yesterday. Expressed solidarity and assured their cooperation, on the other hand, yesterday August 6, Transport Workers Union and Goods Transport also announced a complete wheel jam strike supporting the demands of the Forum, Charter of Demand of All Parties People’s Rights Forum Poonch.
It has been said that Azad Kashmir should be exempted from load shedding, taxes on electricity bills should be abolished, the 15th Amendment and Tourism Act should be avoided, subsidy on flour should be restored, and people arrested during protests uld be released unconditionally.
According to the representative from Hajira, a protest demonstration organized by All Parties People’s Rights Forum was started from College Chowk on the last day in Hajira. The society participated in full. The rally participants were oppressed Hi, Namanzor, Namanzor, thugs, tax, Namazor, water, our possession, yours, Namnzor, your Namazor, (disagree) flag and cracked slogans.
The spokesperson of All Parties People’s Rights Forum is Wajid Ali Advocate, Saud Sadiq Advocate, Ijaz Nisar Advocate, Zaraat Shahid Advocate, Iftikhar Ayub Advocate, Waqar Hayat Advocate, Ijaz Ahmed Advocate, Mokhtar Ali Khan, Tawfiq Kazmi, Sikandar Ali Qamar, Shafaat Faizi.
Malik Abdul Hafeez, Adiba Jameel, Hamza Salim Kayani, Sardar Altaf, Umar Zaman, Sardar Sarfraz, Malik Ilyas, Asim Saeed, Qari Sarfaraz, Sajid Ali Khan, Sardar Zahoor, Naeem Zia, Talha Advocate, Malik Khalil Qaiser Advocate Ziad Advocate Ramzan Mustafa, Abdul Rehman, Haroon Sarwar, Sardar Shahid, Sardar Nazakat, Zahid Kashru and others while speaking said that the administration should be aware, we are fighting for their rights and the administration is doing the worst violence in history on its people. is doing which is not acceptable in any case.
Instead of pleasing the ruling masters sitting in the Muzaffarabad House by the people’s vote, let the people unite for the unity and identity of the motherland. Let the people of Kashmir succeed in any plot to divide us, we are all one. Whoever committed treason will be hanged in the squares of the state.