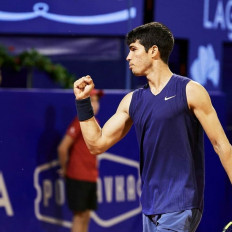 Digital Desk, New York. Carlos Alcaraz used a combination of his determination and maturity to beat Casper Roode 6-4, 2-6, 7-6(1), 6-3 in the final of the US Open on Sunday. At the age of 19, he became the youngest tennis player to hold the first Grand Slam title and the No. 1 spot in the ATP rankings.

Alcaraz arrived at Flushing Meadows as world No. However, he has surpassed the hard-court chief at the top, becoming the youngest player to top the ATP rankings (since 1973). Alcaraz has also equaled the biggest jump at No. 1, while he is only the fourth Spaniard to climb to the top, behind coaches Ferrero, Carlos Moya and Nadal.

All the hard work I have put in with my team and my family. I am only 19 years old and have taken all tough decisions. I also stayed with my parents and my team. This is something that is really special to me. Alcaraz won three consecutive five-set matches to reach his first Grand Slam final, spending 20 hours and 19 minutes on the court in six matches en route to the final. However, he fought hard to defeat Roode.

There is no time to get tired in the final round of the Grand Slam, Alcaraz was quoted by ATP. You have to be ready and show what’s inside you. This is something I work really hard for.