Cracks appeared in the forlane flyover of Banihal traffic was stopped 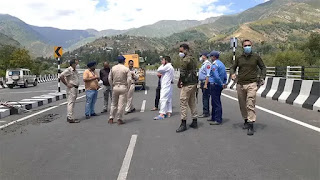 BANIHAL:Small cracks appeared in the flyover adjacent to the four lane tunnel in Banihal, after which the traffic was diverted to the other side:

The Banihal Qazigund Forlane Tunnel has been opened to traffic but the tunnel has not been officially inaugurated yet. On Monday, small cracks appeared in a part of the flyover between Toll Plaza Banihal and Banihal Qazigund Tunnel and the traffic coming from the valley to Jammu was stopped here and diverted to the other side. Officials of Naviga Construction Company told Kashmir Azmi that small cracks had appeared on a small part of the flyover.

He said that this is a minor problem and repair work has been started to resume traffic on it. The tunnel has been completely closed to traffic since August 4, while the collection of toll tax on both sides of the tunnel has started from August 21. The general public alleges that Naviga Engineering Limited Company has allegedly used substandard material in the flyover project, which has resulted in cracks in the flyover within a few weeks of the vehicles running. He demanded an inquiry into the matter.

The Banihal Qazigund Forlane Tunnel is eight and a half kilometers long and the project has been completed at a cost of about Rs 21,000 crore. Its work was handed over to Naviga Company in 2011 by the National Highway Authority of India