Jammu: Apni Party’s protest against the increase in the prices of essential commodities District President Jammu arrested in Dogra Chowk along with dozens of workers 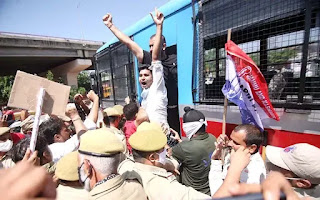 JAMMU: Dozens of party leaders and workers, including Apni party’s district president Jammu Urban, were arrested by Jammu and Kashmir police on Monday as they tried to stop traffic at Dogra Chowk near Towi Bridge:

The protesters, led by Apni party’s district president Jammu Urban Parno Shagutra, gathered at the press club and marched towards Dogra Chowk where a large contingent of Jammu and Kashmir police stopped them from advancing. They stopped and marched towards Dogra Chowk, blocking traffic and protesting against the increase in prices of essential commodities. Police set up roadblocks and prevented them from proceeding.

Dozens of Apni party leaders, including the district president, were detained for resisting and taken to the district police line in Jammu, from where they were later released. Earlier, addressing the protesters, Shagutra said that the rise in prices of essential commodities has made life difficult for the poor and the middle class. Petrol and diesel prices have risen the most in history, but the government is not providing any relief to the people.

He demanded that the government take steps to curb inflation. He said that Bharatiya Janata Party was claiming to be the sole representative of Jammu but now the leaders of this party are not even coming forward to face the wrath of the people. Those who were brought to power by voting betrayed the people. Toyed with their confidence.