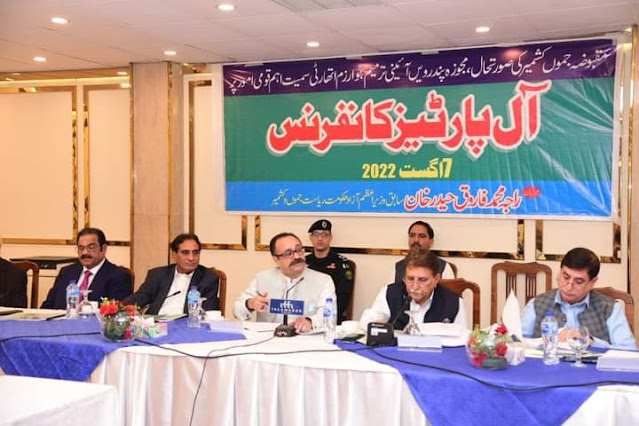 Azadi Times: All Parties Conference hosted by the former Prime Minister of the Independent Government of Jammu and Kashmir, Raja Mohammad Farooq Haider Khan, the 84 thousand 471 square mile state of Jammu and Kashmir was declared an indivisible unity, and it is a controversial state whose future is decided by the United Nations Security Council.

The resolution of the Council reaffirms the determination to make the right determined based on self-determination. The all-party conference held at a local hotel in Islamabad on Sunday was attended by the representative political leadership of Azad Kashmir and Occupied Kashmir and leaders of 19 parties.

Among those who participated in the conference were Prime Minister Azad Kashmir, Sardar Tanveer Ilyas Khan, Chaudhry Muhammad Yasin, President Pakistan Peoples Party Azad Kashmir, Shah Ghulam Qadir President Pakistan Muslim League-N Azad Kashmir, Mirza Muhammad Shafiq Jaral Hundred Muslim Conference, Sardar Hasan Ibrahim, President Jammu and Kashmir Peoples Party.
Leader of AJK Opposition Chaudhry Latif Akbar, Former President Raja Muhammad Zulqarnain Khan, Former President Haji Sardar Muhammad Yaqoob Khan, Former Prime Minister Sardar Abdul Qayyum Niazi, Secretary General Muslim League-N Azad Kashmir Chaudhry Tariq Farooq, Amir Jamiat Ulema y Islam Azad Kashmir Maulana Saeed Yusuf, Amir Jamaat-e-Islami Azad Kashmir Dr Khalid Mehmood, Ameer Jamiat Ulama Pakistan Azad Kashmir Maulana Imtiaz Siddiqui, Convenor Hurriyat Conference Mahmood Ahmed Sagar, Vice Chairman Bar Council Sardar Tariq Masood Advocate, President Supreme Court Bar Azad Kashmir Raja Tariq Bashir Advocate, President High Court Bar Azad Kashmir Haroon Riaz Mughal advocate, members of the Assembly Col. Waqar Ahmad Noor, Sardar Amir Altaf, Hafiz Ahmad Raza Qadri, Ms Nisara Abbasi, Hurriyat leader Muhammad Farooq Rahmani, President Jammu Kashmir Liberation League Khawaja Manzo Raqadar Dar, are included.
A declaration was issued in which it is said that this representative meeting of the political leaders of both sides of the state of Jammu and Kashmir, expressing deep concern over the situation in occupied Jammu and Kashmir after August 5, 2019, declares that the state of Jammu and Kashmir 84471 sq mile is an indivisible unity and its future is to be decided only through the right of self-determination under the resolutions of the United Nations Security Council. Residents condemn the move to amend the law and term these illegal steps by India as a clear and grave violation of UN resolutions to destabilize the balance of electoral politics in the occupied state of Jammu and Kashmir. Rejects the proposed new demarcations. The meeting strongly condemns India’s abrogation of statehood and demands the government of Pakistan immediately report these illegal actions to the United Nations Security Council.
European Union and Islamic Foreign Ministers Conference The meeting strongly condemns the continuous detention of Hurriyat leaders in occupied Jammu and Kashmir and the torture and inhumane treatment of Kashmiris imprisoned in Indian prisons, such as Yasin Malik, Shabbir Ahmad Shah, Mirwaiz Umar Farooq, Ms Asia Andrabi is being subjected to inhumane treatment, in which she is being punished for crimes she did not commit, and reports of similar treatment being meted out to other pro-independence leaders. They should take steps to stop the serious violations of human rights and to release the illegally imprisoned Kashmiris.
The meeting expressed serious reservations about the proposed amendments to the 15th Amendment to the Interim Constitution of Azad Jammu and Kashmir, 1974. Declares that the 13th Amendment made in consultation with the Government of Pakistan in 2018 is a reflection of the aspirations of the people of Azad Kashmir.
Any reduction or change in the constitutional, legal, administrative and financial powers granted to the Government of Azad Kashmir under the Thirteenth Amendment is acceptable. No. and each of these acquired powers The floor will be protected. Considering the passage of the Thirteenth Amendment in 2018 as a historical development, Raja Muhammad Farooq Haider Khan, the former Prime Minister, Shah Ghulam Qadir, the former Speaker of the Legislative Assembly and all the members of the Legislative Assembly at that time We also pay tribute to the Council who, despite the most intense pressure, played their part in passing this amendment. This meeting calls on all concerned to desist from any attempt to curtail these powers.
Independent government is tantamount to distrust of the people of the state of Jammu and Kashmir/Azad Kashmir and the politicians and such nefarious efforts are likely to cause serious unrest among the Kashmiri people. The meeting declares any such attempt as a conspiracy to create a rift in the historic relations between the state of Jammu and Kashmir and Pakistan. Get the assets back from the Kashmir Council.
The Government of Azad Kashmir has taken steps to hand over the possession of the property of Jammu and Kashmir State to the Government of Azad Kashmir. Urges Kashmir to desist from any unconstitutional legislation, the current form of Tawism Authority is not acceptable in any case, Azad Kashmir government takes all political parties, lawyers and civil society of Azad Kashmir into confidence in this regard. A law should be made regarding tourism in the interest of the people of Azad Kashmir. This representative meeting demands the immediate release of the protesters arrested in Poonch from the Azad Kashmir government and urges the protesters not to take the law into their hands and to protect government property. It should be ensured. In the meeting, the high-ranking officers and soldiers of the Pakistan Army who were martyred during the relief activities of the Pakistan Army in Balochistan paid tribute to them. In the meeting, the brutality of the Israeli army against the Palestinian people in Gaza was strongly condemned.