Life On Line Of Control (LOC) 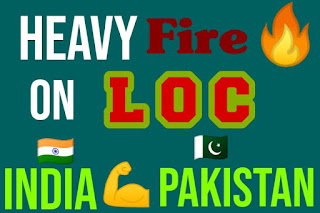 Life On Line of  Control In Jammu Kashmir

How is Life On LOC Line Of Control, which divided the State Jammu Kashmir, Ceasefire For the past few days, the Line of Control (LoC) in the state of Jammu and Kashmir, which the Kashmiri people consider a bloody line, is now facing the two armies face to face.

The two armies have been firing on each other across the bloody line since 1947, when the state of Jammu and Kashmir was subjected to a tribal invasion.

To this day, the two armies remain at the same place where they were stopped by the United Nations, on the same line today, but the thing to think about is that these armies have been in the same place for 73 years. Be it the army of India, or the army of Pakistan, no one has advanced even an inch beyond this line. india VS pakistan,

Now the thing to think about is that when the two forces do not want to move forward, then why do they do ceasefire, what is their purpose for which they fight each other for hours several times a month and use ammunition worth millions of rupees.

One thing is clear, neither the Indian army nor the Pakistani army, wants to move forward. Then what does this war, which has been going on for decades on the Kashmir front, mean? Why do the two armies fight each other?

Kashmiris live on both sides of the Line of Control (LoC) where the fighting is taking place because the line is right in the middle of  Jammu Kashmir.

Large shells, artillery and various small, bombs are dropped by both forces, burning down the homes of people on both sides, Destroying their Businesses and fueling the lives of many.

The only way to fight this is to intimidate the Kashmiri people, change their mindset and spread fear and panic among the people there at all times so that they do not get out of this fearful thinking and raise the slogan of freedom. And remain in their slavery.

Firing has started across the line in recent days. Both forces are showing their strength. According to a report, in the last one month, 25 people, more than 100 houses, more than 40 shops, more than a dozen schools and several, hospitals have been raided. Both are devastated by this fight.