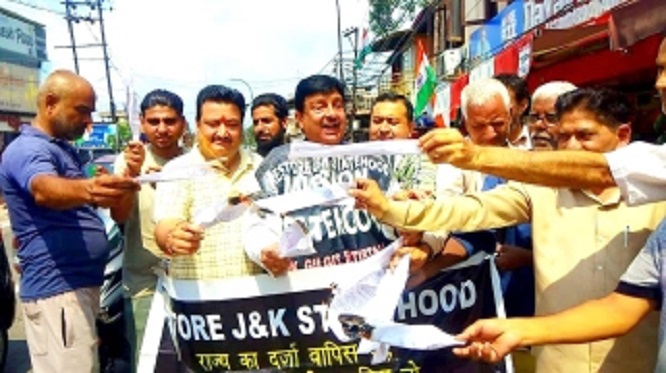 JAMMU: (Azadi Times Latest) In the midst of calling for an all-party meeting against the decision of the mainstream parties of Kashmir to include non-locals in the voting list, people also staged protests in Janipur, Jammu, during which they offered copies of the Election Commission.

A protest was held in Janipur Jammu under the leadership of social activist Sunil Dimple, during which the election commission strongly condemned the inclusion of non-locals in the voting list. The protesters with banners in their hands said.

The inclusion of non-locals in the voting list is a great injustice to the people of Jammu and Kashmir. He said that this decision is intolerable for the people of Jammu and Kashmir and voices will be raised against it at all levels. Social activist Sunil Dimple, who is leading the protest, said that the Election Commission’s decision is a ploy to change the identity of the Dogra state, and the demand we are making at the state level will also be weakened by this decision.

It is sensitive so Prime Minister Narendra Modi should immediately intervene and withdraw this decision. He said that first Article 370 was abrogated and now efforts are being made to distort the identity of Jammu and Kashmir.

Sunil Dimple said that Jammu and Kashmir should be restored as a state so that the identity of the Dogra state can be restored.