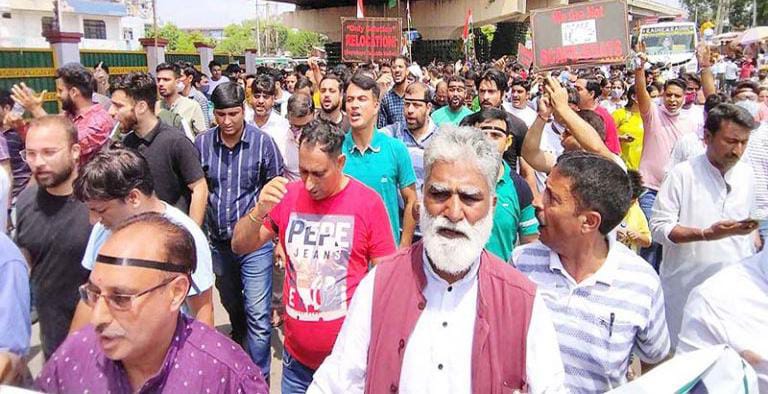 JAMMU: A large number of people took out a protest rally in Jammu against the killing of a Kashmiri Pandit by militants in the hilly district of Shopian in Jammu and Kashmir on Tuesday. To be transferred to Jammu.

According to details, a large number of Kashmiri Pandits protested against the fresh killings in Jammu. Protesters gathered on the main bridge connecting Jammu city to Bikram Chowk, disrupting vehicular traffic.

The protesters said Kashmiri Pandits are becoming soft targets in the Valley and the government has failed to ensure their safety. while the incidents of target killings are increasing day by day, which is spreading fear among them. We were employed in the valley under a special package but everyone is aware of the situation there, he said. Yes, we want our transfer to Jammu so that we can at least survive. The protestors were shouting slogans against the administration. And is not attracting any attention.

He further said that he does not want to be a scapegoat, so the government will have to take a decision in this regard. They will continue to demand that the Kashmiri Pandits should be transferred to Jammu. They said that until our demands are met, they will continue their protest and will not join duty in any case. Arriving at the spot, he celebrated the protestors after which traffic was restored on the Tawi bridge.