Stuart Broad became the leading run-scorer in one over 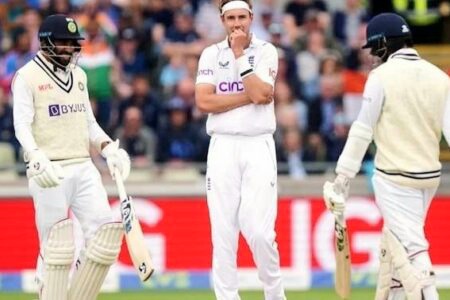 LONDON: English fast bowler Stuart Broad has become the highest run-scorer in the history of Test matches in a single over.

Azadi Times: (July 3, 2022)In the fifth Test match of the series being played between England and India, the English bowler’s 35 runs in an over was not scored by any batsman but by Indian fast bowler Jaspreet Bumra. However, thanks to captain Reshbh Punt’s 146 and Jadeja’s 104, the Indian team managed to score 416 runs in the first innings.

Also made a single run. A six was hit on nine balls, after six consecutive sixes, Stuart Broad also gave up five runs on wide ball. Earlier, English fast bowler Stuart Broad hit six sixes at the hands of Yuvraj Singh in a match of T20 World Cup in 2007.

Earlier in 2003, Brian Lara hit Robin Petersen 28 in one over, George Bailey hit James Anderson 28 in Perth in 2013, Cashew Maharaj hit Joe Root 28 in one over in 2020 while Pakistan Cricket Former captain Shahid Afridi had scored 27 runs in an over by Harbhajan Singh.