The government should stop issuing fatwas of treason, Farooq Haider 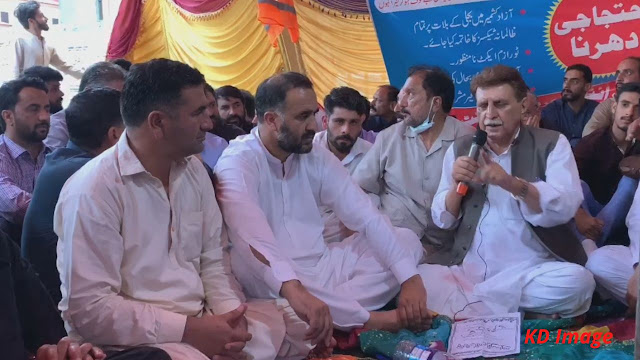 RAWALAKOT –  (Azadi Times) Former Prime Minister of Azad Kashmir and former President of Muslim League-N Azad Kashmir Raja Farooq Haider has said that Kashmir is not capable of unity, no one can divide it.

I will call the people of Azad Kashmir to Muzaffarabad and surround the legislative assembly. Now, this movement has become not Rawalkot but the entire Kashmir movement. You will always be credited with this leadership movement.

He was addressing the protestors after participating in the protest sit-in of the People’s Rights Forum Poonch in Koraolakot. He said that this movement is no longer the movement of Rawalakot but has become the movement of the entire state.

You should also meet the people of the remaining nine districts and join them, I am ready to go with you to the three circles of Muzaffarabad. He said that Azad Kashmir should be exempted from load-shedding, all the people against whom there is an FIR should be quashed and released and fatwas of treason should not be given.

There is no traitor in Azad Kashmir, everyone is loyal to the country. He said that the fifteenth amendment will never be approved. Any member of the assembly who supports it will not be allowed to leave the assembly.

We also ask the Prime Minister of Pakistan to take back the letter and ban those who are doing this to you. The government of Azad Kashmir should be recognized as the representative government of the entire Kashmir so that we can put our own words before the world.

He said that you people deserve congratulations that you have started this movement, and now this movement will reach its logical end. He said that the tourism authority is never acceptable. They want to sell the beautiful valleys here, which will not be accepted in any case.