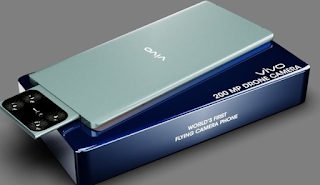 Chinese mobile phone company Vivo Has brought good news for consumers who want drone cameras and now they do not have to buy a drone worth millions to fulfill their hobby but they can become the owner of a drone camera just by buying a smartphone.

According to reports, Vivo has introduced a smartphone which is equipped with a drone camera in addition to its own camera.

It would not be wrong to name this Vivo smartphone as the world’s first ‘flying camera phone’ because inside this smartphone a chip consisting of 4 cameras has been built which is capable of exiting the mobile phone and flying in the air.

In fact, this chip that comes out of Vivo’s mobile is its drone camera which has 4 cameras installed in it and is capable of taking pictures by focusing from a distance. Talking about the price of this ‘flying camera phone’ of Vivo If done, it becomes Rs. 2,07,999 in Rupees, which is not very expensive for the user who wants to buy a drone.

Because it will have a drone as well as a smartphone that will not only be lighter in weight than the drone and will be able to be carried everywhere.

In addition to the drone camera, this Vivo smartphone has a 200-megapixel quad-camera setup with LED flashlight and Corning Gorilla Glass 7 protection sensor. The display and 6900 mAh battery is fitted while the mobile phone also has a fingerprint reader and Face ID sensor.