Why October 27, is black day

by News Desk
in News
Reading Time: 4 mins read
A A
0
0
SHARES
Share on FacebookShare on Twitter 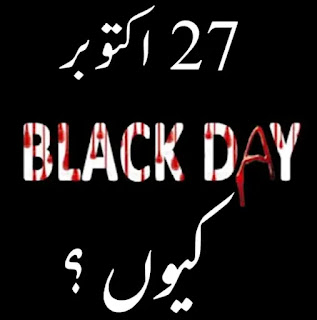 The year 1947 was a terrible year for the people of the subcontinent, the effects of which are still with us seventy-four years later, especially in Punjab, Bengal and the then imperial state of Jammu and Kashmir.

With the passing of August 1947, the line was drawn on the forgotten land. Centuries of communication suddenly turned into enmity. The earth began to quench its thirst with the blood of innocent people. The state of Jammu and Kashmir, which survived, also fell victim to this bloody game. What has been behind it has been debated for the last few years.

The interpretation of history and events continues in its own way. This is the day on which the debate continues, whether it is a black day or a defense day. Unfortunately, there is no issue on which the people of Jammu and Kashmir do not have four to five opinions. Each unit has its own statement. How to see October from British India to decide the future of the imperial states of the subcontinent A separate policy was adopted. The Hindu-Muslim principle was applied directly to British India.

Provinces or areas that were Muslim-majority were part of Pakistan, while Hindu-majority areas were part of India. The rulers of the imperial states were given the power to decide their own future on the basis of their geographical location and the sentiments of the people. They were not in the right. By the way, they were legally given the right to sovereignty, but the British said that no sovereign state would be recognized as a sovereign state in the form of sovereignty, which made it practically impossible.

The decision could not be taken till August, which created a very complicated situation here. Pakistan and India started using the backdoor policy and put pressure on the Maharaja of Jammu and Kashmir to join India. I came down and worked on it from different angles Lord Prominent leaders like Mountbatten, Mahatma Gandhi, Pandit Nehru, Sardar Patel and VP Menon were directly involved in this matter while Pakistan on the other hand could not make such efforts and a very different policy was adopted and more here in October. The agitation began.

On October 22, the tribal intervention took a new turn, and India, which had already laid a trap, had the opportunity to carry out its plan. On October 26, the Maharaja signed an accession to India and Much has been written on the background of the Indian Army’s landing in Srinagar in October. The details do not make sense here. Now, apparently, India’s arrival has gained a legal protection. Did you fulfill the obligations ?? First he took the case to the UN himself and presented a resolution which put the issue on hold forever.

Then with the passage of time he started calling Jammu and Kashmir an internal matter of India and denied any kind of dispute. And then, as a continuation of that, on August 5, 1919, it abolished the special constitutional status and statehood of Jammu and Kashmir, just as we see the tribal invasion as the beginning of interference in the state, just as the double occupation of the state on October 27.

There is a day when the tribal invasion is justified, but every day since October 27, India has started trying to diminish the state’s identity and status and has used every legitimate and illegitimate tactic to do so. It has been used as a weapon, so every day that invades this state to perpetuate its occupation is a dark day, whether it is a tribal invasion in the name of jihad or a military occupation of India in the name of defense. A closer look at these events reveals that they were all part of a global plan to invade not only the British but also the tribal invaders.

India’s top leadership was also aware of the fact that the decision to draw a bloody line on this state was being taken elsewhere and there were only pawns whose strings were being pulled from somewhere else.