Kartarpur: At the time of the partition of India, a Sikh brother met his Muslim sister 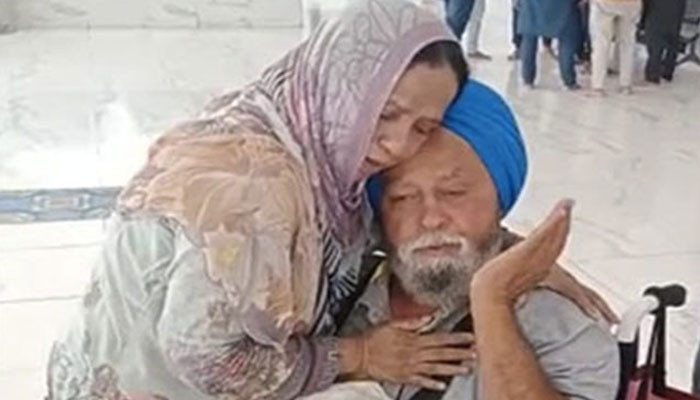 On the occasion of the partition of India, the brother who was separated from the family and remained in India reached Gurdwara Darbar Sahib to meet his sister in Pakistan.

According to Indian media reports, Amarjit Singh, who remained in India on the occasion of the partition of India and could not come to Pakistan with his Muslim parents, who were his real parents, came to Pakistan after 75 years to meet his sister.

Amarjit Singh Attari came to Pakistan through Wagah border to meet his sister. Seeing her brother, 65-year-old sister Kulsoom Akhtar could not control her emotions and kept crying hugging her brother.

Kulsoom Akhtar, a resident of Faisalabad, while talking to the local media said that her parents came to Pakistan from Jalandhar in 1947 while her one brother and one sister remained there.

She said that she was born in Pakistan, but she used to hear her mother talking about her lost brother and sister, while her mother often cried remembering her two children.

The sister said that she did not expect that she would ever meet her brother and sister, but her father’s friend Sardar Dara Singh had come to Pakistan from India a few years ago and had met them.

He said that when he told Dara Singh about his lost brother and sister and the area of ​​his old home, Dara Singh went to India to look for them and then gave the good news that his brother was alive, now named Amarjit Singh. He was adopted by a Sikh couple, while his sister had died.

After getting the brother’s information, Kulsoom Akhtar contacted him on WhatsApp, after which both of them talked and decided to meet.

Despite severe back pain, Kulsoom Akhtar went from Faisalabad to Kartarpur to meet her brother.

On the other hand, Bhai Dara Singh said that when he came to know that his real parents are in Pakistan and they are Muslims, he was shocked to know.

He said that he was happy to know that three of his brothers were also alive while one brother who lived in Germany had passed away.

He also said that he will now come to Pakistan to spend time with his family.

Karachi: Consul General of UAE met with the business community, determined to help the flood victims