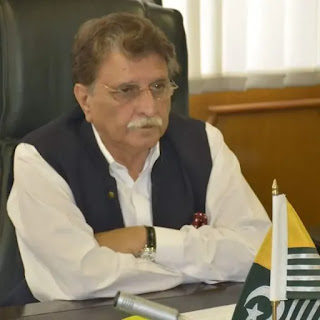 Charhoi: (21-09-26)PML-N Azad Jammu and Kashmir President, former Prime Minister Raja Muhammad Farooq Haider Khan has said that in the by-elections, the people should use their votes to stop the conspiracies to take back their rights:

What the PML-N government had achieved by working hard and amending the constitution of Azad Kashmir in spite of all the difficulties and obstacles, we have protected national honor and dignity for five years, financially and politically. And economically stabilized, defended the status of Azad Kashmir and the identity of the state at every step, workers and positions for the success of the PML-N in the by-elections of Chadhui to maintain balance in politics and end political tyranny.

Daran work hard, I will be here till the elections myself and I will not allow anyone to steal the people’s vote, Imran Khan’s government has made a deal for Kashmir and is moving towards the plan of partition of Kashmir League N can stop. We have ruled in a dignified manner for five years, stood by Nawaz Sharif and will continue to stand.

Nawaz Sharif is a benefactor of Kashmiris with whose help and guidance we have achieved the basic rights of the people in the region. Raja Mohammad Farooq Haider Khan expressed these views while addressing runner-up meetings of PML-N functionaries and workers at Kala Dub, Palal Rajgan and Chadhui city on his way from Mirpur to Charhoi city and workers at “Awami House” Narakot.

Addressing on the occasion, Raja Muhammad Farooq Haider Khan said that an important part of PML-N’s manifesto in the 2016 elections was independent. The Kashmir Assembly and the government were to be empowered. Before the grace of God, the Eleventh Amendment was passed in Azad Kashmir and the High Court was given the status of Shariah along with a learned judge.

We have abolished the monopoly of Kashmir Council and taken back the rights of Azad Kashmir through the 13th amendment. He said that the employees of Jammu and Kashmir Council used to get 34 months salary instead of 12 months. The council was a hotbed of looting, withdrew the authority to issue state subjects to the Azad Kashmir government, Raja Farooq Haider Khan said, adding that the PML-N government had set up a CBR department and collected Rs 100 million in tax revenue. 280 crore which made the region financially stable. When we got the government He was indebted to the tune of Rs 22 billion and when we left the government he had Rs 20 billion in the treasury.

We did not take any draft for five years. He said that the PML-N government had enacted legislation imposing death penalty for sexual abuse of children below 18 years of age, introduced interest free loan system in Azad Kashmir, freed Azad Kashmir Bank to schedule. We completed 51% equity of Kashmir in June. PML-N Azad Jammu and Kashmir President Raja Muhammad Farooq Haider also addressed an election corner meeting at the house of PML-N leader Raja Iftikhar Bhutto in Chadhui.

Former Assembly candidate, PML-N central leader Raja Muhammad Iqbal Khan, Assembly candidate Raja Muhammad Reyast and PML-N leader Chaudhry Khadim Inqalabi also addressed the meeting. He vowed that inshallah October 10 will be the day of victory of PML-N and Raja will win this seat by a landslide and present it to the leadership. PML-N President Raja Muhammad Farooq Haider Khan while addressing the gathering said that PML-N workers and office bearers can be proud of their government’s five-year performance.

Raja Mohammad Farooq Haider Khan said that the government of Imran Khan had put an end to all these measures and paved the way for the partition of Kashmir. It wants to make it smooth, so in these by-elections it is necessary to make the PML-N successful in stopping these conspiracies. PML-N workers should unite and protect their votes on October 10 and make the PML-N candidate successful.