Sri Lanka won the Asia Cup for the sixth time, Pakistan got a crushing defeat 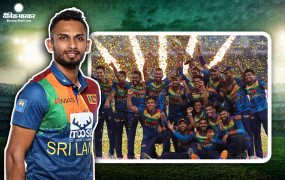 For the Sri Lankan team, Bhanuka Rajapaksa scored an unbeaten 71 off 41 balls and Wanindu Hasaranga scored 36 runs. While for Pakistan, Harris Rauf took three wickets. Significantly, for the fourth time in the history of Asia Cup, the teams of Sri Lanka and Pakistan were seen face to face in the title match. Earlier, in the final played between these two three times, Sri Lanka had won twice and Pakistan had won once. The Sri Lankan team won the Asia Cup by defeating Pakistan in the final match played on Sunday.

The Pakistan team had a bad start in the final match. While chasing the target of 171 runs, the team lost two important wickets in the fourth over itself. Captain Babar Azam and Fakhar Zaman returned to the pavilion in Sasse. Due to which the pressure on the Pakistan team increased, which remained till the end of the game.