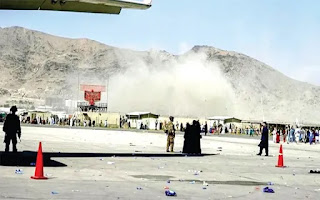 KABUL: At least 13 people have been killed and several others injured in two bomb blasts outside Kabul, the capital of Afghanistan:

U.S. officials have confirmed that the blast outside Kabul Airport was a suicide bombing outside the opening gate of Hamid Karzai International Airport, where hundreds of Afghans were trying to enter the airport. The bomber struck shortly after noon in front of a U.S. military base, killing 13 people and wounding several others, including three U.S. military personnel. All the injured are being taken to hospital for medical treatment.

It happened outside the Baron Hotel nearby. And this is one of the few gates that was closed due to the threat. The British Defense Secretary said that the explosion took place outside the Abbey Gate where our army is providing security but we have the casualties of the British army as a result of the explosion. It is believed that the United States, Britain and Australia had stopped their citizens from going to Kabul airport only yesterday. Stay away from Kabul Airport. The British authorities warned their citizens that those who are in the area of Kabul Airport should get out and go to a safe place, British citizens can get out of Afghanistan by any other means. If so, leave immediately.