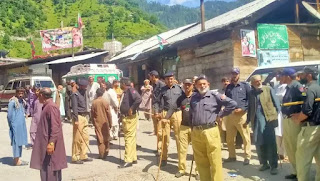 Funeral prayers are offered for A 17-year-old boy who was killed by an unjust father in Reshian area near Hatian Bala buried in his ancestral graveyard:

LEEPA:- (Daily AMV Tribune) According to details, shopkeeper Khursheed Ahmed and shopkeeper Jalal Pir called the killer’s father and said bad things about him. He said, “We are 100% sure that your son committed the theft. We have calculated from Monday.” He said, “The theft was committed by Bilal.”

The dead body of Bilal Mir was shot dead and buried in his native village of Reshian in sighs and sobs after the postmortem. Hatia police station has been closed. The whole area was devastated when the body of young Bilal Mir was found. Mumtaz Lone told my husband that you have mentioned your son’s name. Give me severe punishment for which my husband got angry and killed my young son with three bullets. I will be left alone. I am the Prime Minister of Azad Kashmir. Chief Justice of Azad Kashmir.

Chief Secretary of Azad Kashmir and IG Azad Kashmir. Justice should be done. The heirs closed the bazaar and protested that the police is not cooperating with us. The police have joined hands with the accused and are threatening us. If he is not arrested, we will not meet him in peace. If all the accused are not arrested within five days, we will protest in front of Hatian Bala Press Club and go on hunger strike. Raza Gilani and SH and City Hatian Bala Ansar Sajjad told reporters that four named accused have been arrested and City Police Station Hatian Bala has been closed.

Raids are being carried out to arrest the other accused. Former PPP candidate for Assembly constituency no Talking to reporters, Shaukat Javed Mir said that a judicial inquiry should be formed and a transparent inquiry should be held and the accused involved should be punished according to law so that no one would set up his own court in future.

Shaukat Javed Mir President District Press Club Hatian Bala Syed Omar Kazmi Secretary Information Press Club Mubarak Hussain Awan Senior Journalist Arshad Rasheed Awan and other people from different schools of thought participated. Now a question arises here. Why did the shopkeepers file their lawsuits instead of taking legal action? Why did the father shoot his son instead of investigating the incident? There is something behind the scenes.